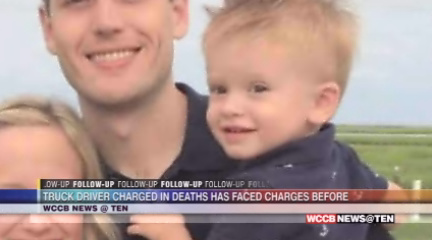 CHARLOTTE, NC — A delivery truck driver charged in the deaths of a toddler and newborn has had several previous run-ins with police.

In 2007, Matthew Deans was found guilty of driving after drinking alcohol while underage.  He was also charged with six other traffic offenses.  All those charges were eventually dismissed.

Deans is now charged with two counts of misdemeanor death by vehicle after a crash that killed two-year-old Dobbs Eddings last Saturday.

Dobbs’ pregnant mother had an emergency C-section after the wreck.  The newborn also died.  It happened near Wilmington, but the family is from Charlotte.

In lieu of flowers, the family is asking that donations be made to Mission of Hope Haiti.  To donate visit www.mohhaiti.org and click donate now.