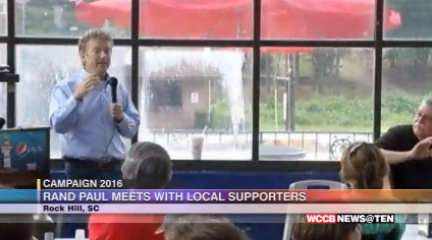 ROCK HILL, SC — The road to the White House in 2016 continues its path through South Carolina.  Senator Rand Paul attended a barbecue in Rock Hill with the York County Republican Party Friday.

Paul told supporters he wants to protect privacy and keep the federal government out of their personal information.

“Think about the things your government can know about you… I can tell who your doctors are and what your medicines are,” said Paul.

Paul is the third candidate to visit the state this week.  Hillary Clinton and Carly Fiorina met with their supporters in Columbia on Wednesday.

Winter Weather Preparedness Week: What Another La Nina Winter Means for Our Forecast