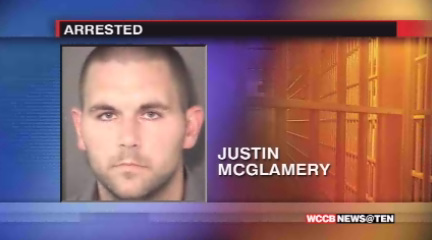 Investigators say Justin McGlamery, 29, purchased and possessed heroin on four different occasions over the past two weeks in Mecklenburg and Union counties.

“It’s sad because he’s in a position of public trust. His actions and decisions determine the fate of others,” said Chief Deputy Ben Bailey.

Bailey says deputies followed McGlamery to Stonecrest Shopping Center in Ballantyne last Thursday where they caught him buying heroin while on the job.

Detectives say McGlamery was driving his state issued vehicle and wearing his badge and duty firearm during the deal.

“Before we placed him in custody, he actually swallowed drugs and had to spend the night in the hospital before being incarcerated,” said Bailey.

McGlamery has also been charged with selling hydrocodone and oxycodone prescription medicines. Bailey say McGlamery used the money from the deals to buy heroine.

McGlamery is out of jail on bond. His first court appearance is June 7.