Students Forced Out Of Apartment Complex 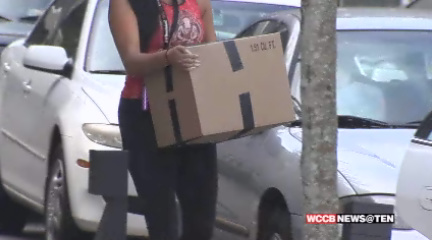 CHARLOTTE, NC — The deadline has passed for residents to move out of an apartment complex that needs major repairs.

Students living at The Circle University City were told they had one week to leave after a floor in an apartment caved in, causing damage to a ceiling below.  Parents helping their kids move out Tuesday told us they’re frustrated with the whole situation.

“I think it’s terrible,” said parent Doug Price.  “I mean, I had to take off work today, come up–I live in Stokes County–drive down here and get her all moved out.  Let alone, when they first moved in, took about two months before they finally got in their room.  Now they give them one week to get moved back out.”

Students were offered a $500 stipend, but told us in order to get it, they had to sign paperwork promising not to sue the company.  Crews will make repairs through July.