The Edgitators: Does Resignation Imply Guilt? 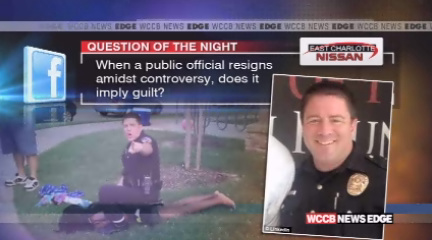 A viral video shows him pushing a 14-year-old girl to the ground and pointing his gun at other kids during a community pool party where police were responding to a reported fight.  Wednesday, the city’s Police Chief called Casebolt’s actions “indefensible”.

“Out policies, our training, our practices do not support his actions,” said Chief Greg Conley.  “He came into the call out of control, and, as the video shows, was out of control during the incident.”

Casebolt reportedly submitted his resignation through his attorney and left town, saying he feared for his safety.

And that brings us to our Question of the Night: When a public official resigns amidst controversy, does it imply guilt?  The Edgitators weigh in…