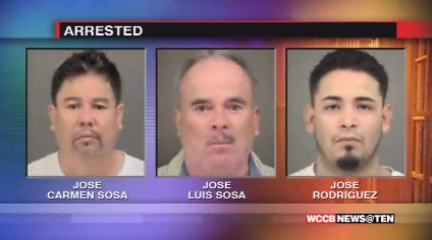 Homeland Security officers raided the Mint Hill home the men were staying at Saturday.  Neighbors say they’re shocked at what was allegedly going on inside the home.

“They pulled out bags of guns ans what looked like bags of money too,” said one neighbor.  “And all kinds of drugs.  It was just bags and bags of everything.  And I didn’t believe it was going to go on in this neighborhood or how it went under the radar.”

The three men all appear in front of a federal judge this week.