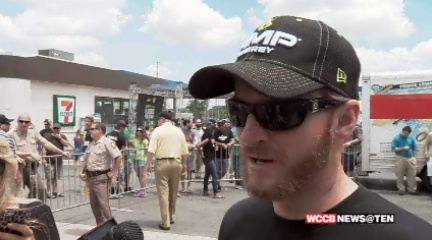 CONCORD, NC (WCCB Charlotte) — Dale Earnhardt Jr. met with fans and unveiled his No. 88 Chevrolet team’s fan-voted Amped Enery Drink paint scheme on Thursday at the 7-Eleven in Concord.  Earnhardt said he enjoys riding a car that the fan had a hand in…even if its as little as the car’s paint scheme.

Dale Jr. and the rest of the cup guys head north to Michigan International Speedway this weekend. It’s a fast track and place that Earnhardt Jr. has won twice in his career. His last victory in Michigan came in 2012.

“I have been having a good time driving and having fun in the races,” Earnhardt Jr. said. “That’s really all that matters is going out there and enjoying yourself. We were able to get a win early at (Talladega) and lock ourselves in the Chase (for the Sprint Cup). We would like to win some more races and we think we have an opportunity every time we show up.”