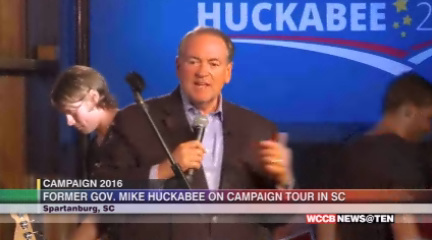 SPARTANBURG, SC — Another Presidential candidate is trying to get on the minds of South Carolina voters.  Former Arkansas Governor Mike Huckabee made several stops in the Palmetto State Friday.

He began his visit with a meet and greet in Spartanburg.  He’ll meet with supporters in Indian Land and Rock Hill Saturday.  One of the big topics Huckabee discussed was the decision by the Iowa Republican Party to pull the plug on the Iowa straw poll this year.

“We made the decision a couple of weeks ago that we would not use our resources on the straw poll and just focus on the caucuses,” said Huckabee.  “And today the party apparently agreed that that’s where the focus needs to be.  And I’m delighted to hear it.”

The straw poll has been taking place since 1979 and acts as a fundraiser for the Republican Party in Iowa.