The Edgitators: Does Donald Trump Stand A Chance? 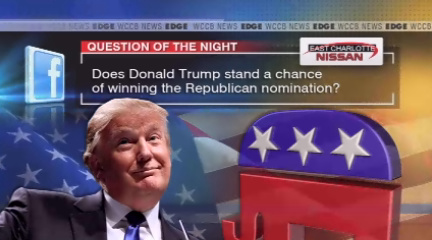 Trump jumps into the Presidential ring, becoming the twelfth Republican to enter the race for the White House.  The real estate mogul and reality TV show host made his White House aspirations official Tuesday at New York’s Trump Tower.  Trump also released a summary of his net worth, totaling nearly $9 billion.

“I’m using my own money,” said Trump.  “I’m not using lobbyists.  I’m not using donors.  I don’t care.  I’m really rich.  I’ll show you that in a sec.  And by the way, I’m not even saying that to brag it up.  That’s the kind of mindset, that’s the kind of thinking you need for this country.”

Trump has flirted with running for President in the past, but this is the first time he’s officially thrown his hat into the ring.

So what do you think?  Does Donald Trump stand a chance of winning the Republican nomination?  The Edgitators battle it out…