The Edgitators: Could The Charleston Shooting Have Been Prevented? 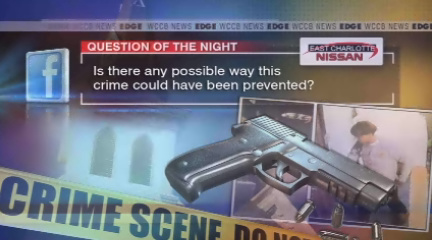 A community in shock, a community in disbelief, but a Holy City, unbroken.  A gunman, accused of opening fire inside a historic church in downtown Charleston, arrested here in the Charlotte area.

21-year-old Dylann Roof of Lexington, South Carolina is back in Charleston Thursday, after waiving extradition during a hearing in Cleveland County.  He was booked into the Charleston County Detention Center at 7:28 Thursday night.

He’s accused of killing nine people inside that church, including a South Carolina Senator.  The shooting was reported at around 9pm Wednesday night.  Dylann Roof later made the 245 mile drive from Charleston to Cleveland County, where police in Shelby arrested him around 11:15 Thursday morning.

A law enforcement official says the suspect told the victims he was there “to shoot black people”.  Three people survived the shooting.  Federal authorities have opened a hate crime investigation into the shooting.

And that brings us to our Question of the Night: Could the Charleston shooting have been prevented? The Edgitators weigh in…