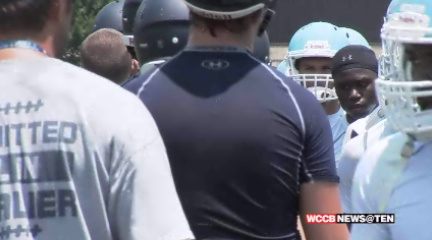 CHARLOTTE, NC (WCCB Charlotte) — Twelve teams from both North Carolina and South Carolina participated in this year’s Carolina Panthers 7 on 7 Tournament at the Panthers practice field on Friday. There were four state champion teams from the 2014 season in the field.

Lots of big time high school football recruits were there like Cuthbertson High’s Austin Kendall who is committed to Oklahoma as a quarterback.

“There’s all state championship teams here,” Kendall said. “It’s an accomplishment to be out here.”