The Edgitators: Was Removal Of The Confederate Flag Just Political? 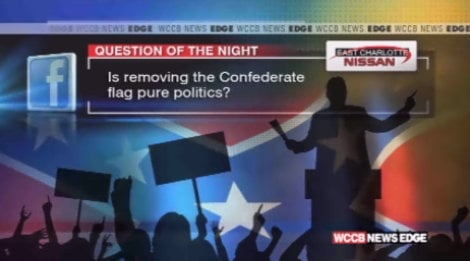 The calls to remove the flag are reverberating across the state in the wake of last week’s deadly shooting at an historic African-American church.  South Carolina Governor Nikki Haley says the Confederate flag flying in front of her state capitol building has to go.

“My hope is that by removing a symbol that divides us, we can move forward as a state in harmony and we can honor the nine blessed souls who are now in heaven,” said Haley.

Last week, South Carolina Senator and Republican Presidential hopeful Lindsey Graham said that while it was time for South Carolinians to consider taking down the flag, it marked “a part of who we are”.  Monday, he changed his tune, standing alongside Governor Haley during her announcement to take down the flag.

And that brings us to our Question of the Night: Is removing the Confederate flag pure politics?  The Edgitators weigh in…