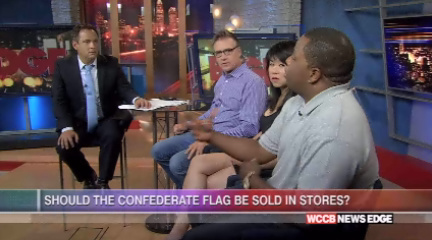 South Carolina lawmakers took the first step today toward figuring out what to do about the Confederate flag flying at the state capitol.

The state’s House and Senate passed an amendment Tuesday to allow debate later this summer on whether to remove the flag from State House grounds.  Tuesday’s vote comes just one day after South Carolina Governor Nikki Haley called for the flag to be taken down.

Meanwhile, several major corporations are also taking action on the issue.  Ebay and Amazon are banning the sale of Confederate battle flag merchandise.  So are Sears, Target and Walmart.

And that brings us to our Question of the Night: Should the Confederate flag be sold in stores?