1-On-1 with NBA Commissioner Adam Silver 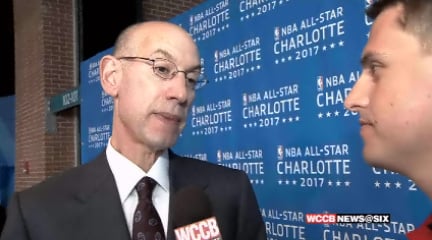 The best basketball players in the world will hit the court at Time Warner Cable Arena in 2017, for the NBA All-Star game.

On Tuesday, NBA Commissioner Adam Silver was in town for the historic revealing in Uptown. After the announcement, the Commissioner went 1-on-1 with Brandon Davidow to talk in greater detail about the All-Star game. Silver touched on why this is such a big deal for Charlotte, what it means to have all eyes on the Queen City during that weekend, and he reveals his favorite All-Star event.

The 2017 All-Star game will take place on Sunday, February 19, and it will be the second All-Star weekend in the history of Charlotte. The first was in 1991.