The Edgitators: Will You Be Changing Your Plans This Summer? 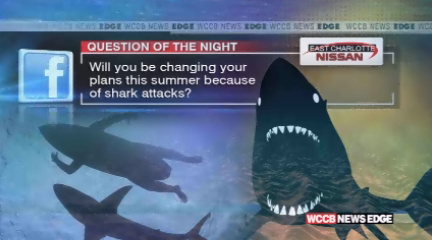 And you might as well start cuing the Jaws music now, because our main topic tonight is… sharks!  That’s right, another shark attack off the coast of North Carolina Wednesday, this one at Ocracoke Island.  A 67-year-old man suffered bites on his torso, leg and hands.
Last Friday, a 47-year-old man suffered injuries on his right leg and lower back, also from a shark attack.  This one happened in Avon along the Outer Banks.  There have been seven shark attacks along the North Carolina coast in the last three weeks.
Experts say the state usually sees only one to two per year.  South Carolina has seen three attacks this summer.  One theory from scientists is that saltier sea water in the Carolinas could be attracting more sharks.
And that brings us to our Question of the Night: Will you be changing your plans this summer because of shark attacks?  The Edgitators weigh in…