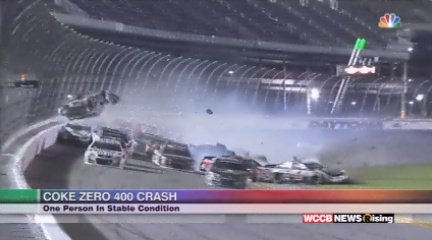 DAYTONA, FL  – NASCAR’s Coke Zero in Daytona did not begin until after close to midnight and ended with a thrilling finish, but a horrific crash.

Driver Austin Dillon’s car went airborne and tore down part of a fence, sending debris flying into the stands.  Medics examined 13 fans, one of which was sent to the hospital in stable condition.

Dillon walked away with a bruised tailbone and forearm.

Dale Earnhardt, Jr. pulled off the win with Jimmy Johnson coming in at second.  Jeff Gordon finished his final race in Daytona coming in at sixth place.