Edge On The Clock: Perry VS Trump 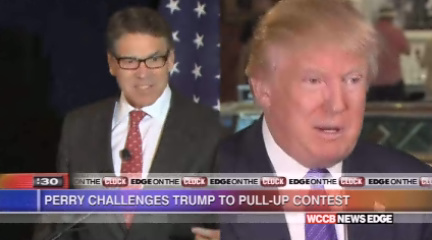 Talk about a war of words!  Former Texas Governor Rick Perry wants to get physical with the Donald.  During an interview Wednesday, Perry was asked how he would respond to Trump’s claims that he lacks the “brain power” to run a successful Presidential campaign.  Perry responded by saying: “Let’s get a pull-up bar out here and see who can do more pull-ups!”  So who do you think would win?