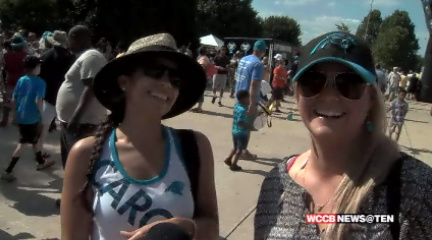 SPARTANBURG, SC — Carolina Panthers football is officially back.  Friday was not only the first practice of training camp, but also a big party to kick off the season.  Jeff Zell kicks off our coverage live from Spartanburg where the atmosphere is electric.

Black and blue everywhere!  fans have Panthers fever.  The fans are feeding off the success of the team.  The 2014 Panthers are the first team to repeat as NFC South champions in the history of the league.

“I feel like there’s a different energy, because we feel like we are a much better team that we have been in the past two years,” said linebacker Thomas Davis.  “And with the additions we have made to this team, we feel like its going to put us in a better position.”

Health and happiness with players in the locker room is important to any NFL team.  And captain Cam Newton, who was not 100 percent at this time last year, personifies both.

“I had a person ask me, is this the best shape you have ever been in in your life?  I’m like, I wouldn’t say that,” he said.  “I’d say that this is the best I have felt in a long time.”

And its left Panther fans feeling the best they have in a long time.

Friday was the first of ten practices to be held in Spartanburg before preseason game number one.