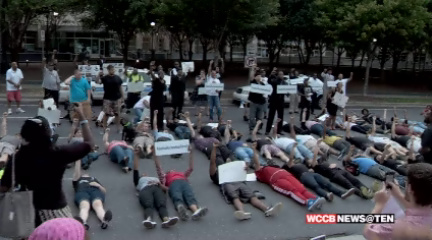 Georgia Ferrell told the crowd that in order to make changes in the community, people would need to head to the polls.

“Our greatest weapon is voting,” she said.  “Get out and vote.  We vote them in, we can vote them out.”

The Ferrell family also attended a die-in outside the courthouse.  Participants laid in the street for four and a half minutes to honor Jonathan Ferrell and Michael Brown.

The time signifies the 4 and a half hours Brown’s body was on the ground after he was shot and killed by Officer Darren Wilson.