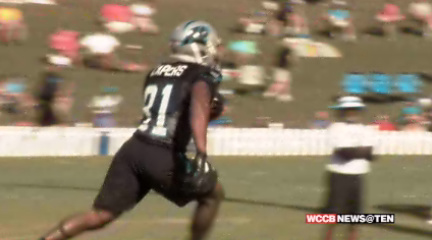 CHARLOTTE, NC — Panthers practice is over in Spartanburg, at least for the next few days.  WCCB Charlotte’s Jeff Zell spent the day at training camp and details what position is a key focus for Friday’s game.

It was the team’s final practice Wednesday morning.  Ron Rivera says Cam and the ones will play most of the 1st quarter.  But the position the head honcho is keeping a keen eye on is wide receiver.

“Five or six or seven guys that are really, you know, at it right now, that are battling,” said Rivera.  “We really haven’t projected anybody in terms of clear-cut, you know, top five or six, but we’ve got a group of guys that are just showing every day.  This is the deepest I’ve seen that group in a long time, and it’s quality depth.  I think, you know, your first four or five guys are really true quality guys, and then as you start looking at your sixth, seventh, eigth guys, you know, these are young guys that flash.”

Rivera commented more on the fallout of the Newton vs Norman clash on Monday.  Coach said vets like Thomas Davis, Greg Olsen and Charles Johnson stepped up and assured coach that the scuffle here in Spartanburg would end in Spartanburg.

The Panthers will play in Buffalo against the Bills on Friday.  And you can watch the game right here on WCCB.  Our Panthers pregame show begins at 6:30.  The Got Game crew will get you prepped for all the action!