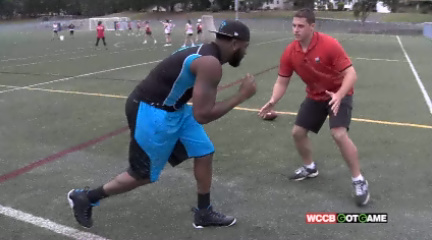 One of the key battles this preseason has been the defensive end position. Since the departure of Greg Hardy, the Panthers are looking to fill the void with a long term solution.

Panthers defensive end Frank Alexander is fighting for that starting spot opposite of Charles Johnson. Earlier this summer, Alexander showed Brandon Davidow the physical and mental aspects of playing the DE spot in the NFL.

Alexander recorded a Quarterback Pressure in the Panthers first preseason game against the Bills. The Panthers have four more days at Training Camp in Spartanburg, before they hit the field at Bank of America Stadium on Saturday to play Miami.

Watch the Panthers and Dolphins starting at 6:30 on WCCB Charlotte, your Official Home of the Carolina Panthers.