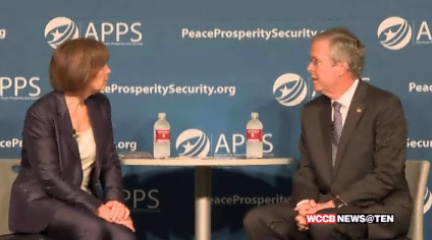 ROCK HILL, SC — The race for the White House continues its tour through the Palmetto State this week.  Former Florida Governor Jeb Bush pitched his campaign to voters at Winthrop University in Rock Hill Tuesday.

“Should women go in to combat?” asked the moderator.

“Absolutely,” said Bush.  “If they’re Rangers they’re clearly qualified.  These decisions ought to be made by the military, not by, you know, the political side of life in Washington DC.”

On Monday, Bush talked about VA reform in Columbia and Charleston.