Edge on Demand: Gun Violence in the U.S. 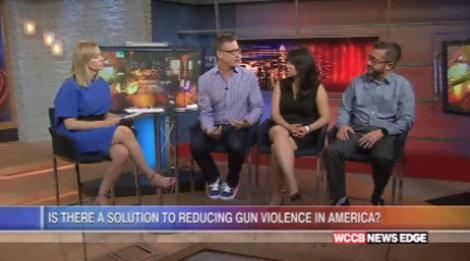 Family and friends of the journalists shot and killed on live TV Wednesday are honoring the pair, while struggling with feelings of grief and shock.  24-year-old Alison Parker and 27-year-old Adam Ward were shot and killed while conducting a live interview during WDBJ’s morning broadcast.

The gunman, Vester Flanagan, was a former reporter who had worked at the same Roanoke station, but was fired two years ago.  Flanagan later died from a self-inflicted gunshot wound.  Federal law enforcement officials say he legally obtained the gun he used in the shooting.  Alison Parker’s father says it’s time for America to do something about gun violence.

“I know how the business works,” said Andy Parker.  “It is a great story a couple of days, and then it goes to the back burner and nothing happens.  But I can promise you and I can promise the American people I am not going to rest until I see something get done here.”

That brings us to our Question of the Night: Is there a solution to reducing gun violence in America?