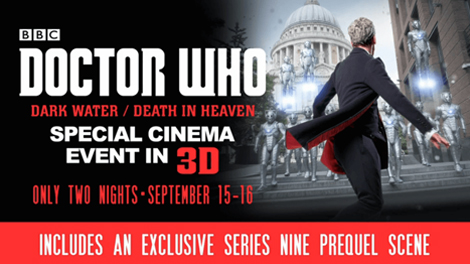 Doctor Who Text Contest Official Rules Wednesday, September 9th, 2015 1 Winner: 1 winner will receive admission for 2 to an advance screening of Doctor Who: Dark Water/Death in Heaven in spectacular 3D onTuesday, September 15th at 7:30PM at Regal Cinemas Stonecrest at Piper Glen (ARV $36), a $25 gift card for snacks (ARV $25) and a Blu-ray box set of Doctor Who: The Complete Eighth Series (ARV $89.98).  The total ARV is $150.98. HOW TO WIN: No purchase necessary. Viewers must join the WCCBVIP text club by noon on Wednesday, September 9th 2015 by texting WCCBVIP to 45548. Between 12pm and 1pm, the VIP text club will receive a code word to text back for a chance to win. Winner will be randomly selected at 5pm. No tickets will be mailed. All prizes must be claimed at the station. No exceptions. Deadline for entries is 5pm on September 9th.1 entry per person. ELIGIBILITY: This film is rated PG-13. Winner will be chosen at random and sent a confirmation text detailing when & where to pick up passes. One entry per person; any duplicate entries will be disqualified. Fathom Events and WCCB-TV and their affiliates accept no responsibility or liability in connection with any loss or accident incurred in connection with use of a prize.  No purchase necessary. To win, you must be 18 years or older and a legal resident of North or South Carolina. No employee of Fathom Events and its affiliated artists and promoters (“Sponsor”) or WCCB-TV (“Station”), their affiliated companies, his or her spouse, or immediate family members and/or those living in the same household of each shall be eligible to win.  Immediate family members include, but are not necessarily limited to, parents, brothers, sisters, nieces, nephews, aunts, uncles, cousins, and grandparents. Employees, or relatives of employees, of any television or radio station in the Charlotte Nielsen DMA or Charlotte Arbitron ADI are not eligible to win.  Additionally, Station reserves the right to disqualify any other person from participation in the Contest where such participation would, in the sole opinion of Station, compromise or give the appearance of compromising the integrity of the Contest.  No person shall be eligible to win any contest conducted by the Station more than one time in any sixty-day period.   No responsibility is assumed by WCCB, their respective subsidiaries, parents, partners, or other providers for lost, late, misdirected, or illegible entries or for any computer, online, telephone or technical malfunctions that may occur. MISCELLANEOUS:1)  The winner consents to the use of their name, likeness and/or voice without further compensation for Station’s or Sponsor’s advertising, public relations and promotions purposes. By entering Contest, the winner gives Station and Sponsor full rights in perpetuity to broadcast, or distribute their name, likeness and/or voice, in any edited, distorted or altered form executed by Station, in any media including but not limited to broadcast television, radio and the internet, without any further compensation. 2)  Station and Sponsor accepts no responsibility or liability for loss or damage due, in whole or in part, to the awarding, acceptance, possession, use or misuse of prize or from participation in the Contest.  Winner releases Station and Sponsor, their affiliated companies and employees from any and all liability and claims.  3)  Prize is non-transferable and non-assignable. Prize can not be substituted for cash value. Station’s decision with regard to all matters relating to Contest, including those matters not specifically addressed in these rules, shall be final. Prize not claimed in accordance with these rules will be forfeited and another winner will be selected by another random drawing. 4)  Winner will be notified by text no later than 6pm on September 9th. Winners must claim tickets by Friday, September 11th at 5pm. One Television PlaceCharlotte, NC 28205704-372-1800Hours: M-F 8:30am – 5:30pm