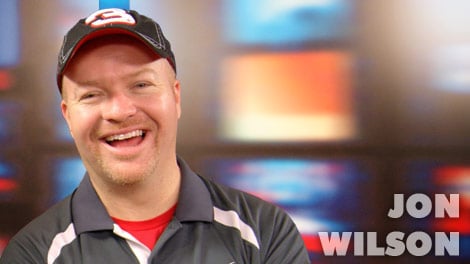 Born to English parents and a resident of Charlotte for 25 years, Wilson pairs a bit of dry British humor with a fun-loving attitude of the South. In short, he likes Shepard’s Pie AND Nascar. The past 8 years he‘s been a major part of the morning show at WCCB Charlotte. You can also find him getting rowdy at Charlotte Checkers Hockey games or on the biggest HDTV in the world at Charlotte Motor Speedway. Some of you may remember him on the radio at WBT 1110am, 1065 The End, or on 99.7 the Fox. His specialty? Making people laugh. “Applause is almost mandatory,” he says. “If you can make people laugh, you‘re really doing something.” He doesn’t take family vacations..they take “adventures” and if you ever meet him ask about the time their RV caught fire in the desert..or cooking breakfast with Mickey at Disney..he has good stories! He loves America, being born a “Scouser” he also loves Liverpool Football Club. He‘s on the Charlotte advisory board of the USO of North Carolina. He’s a big supporter of the Second Harvest Food Bank, American Red Cross, Salvation Army and the Student Hunger Drive. In 2012 he was named “Best Local TV Personality” by Creative Loafing In 2011 he was named the “Good Neighbor of the Year” by the Greater Carolinas Chapter of the American Red Cross

Wilson's World Homeschool: Learning About This Weekend's Blue Moon With The Schiele Museum In Gastonia