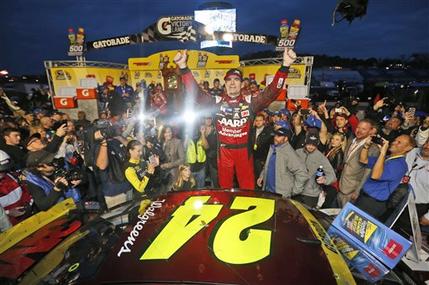 MARTINSVILLE, Va. (AP) — As the adoring crowd lingered in the darkness at Martinsville Speedway, Jeff Gordon took a moment to soak it in.

In a 23-year career that is one long highlight reel, his victory Sunday overwhelmed the NASCAR great. He had just earned a spot in the championship race, a chance to race for an elusive fifth title. It was, in his mind, “one of my finest moments I’ve ever had.”

So Gordon, who at 44 years old celebrated his ninth Martinsville win by jumping along the track like a little boy on Christmas morning, climbed into the grandstands to share the emotion of the victory with the fans.

“I don’t know what it feels like to be a rock star, but that’s as close as it can get,” Gordon said. “That’s a rock star moment right there.”

He has Matt Kenseth to thank for this storybook ending to his career.

Kenseth intentionally wrecked Joey Logano – payback from an incident three races ago – to take the race leader out with 47 laps remaining. Logano had the dominant car, and Kenseth, who was in an earlier wreck with Brad Keselowski, came back on the track 10 laps down and drove Logano into the wall.

Logano had led 207 of the 500 laps and was furious. His father, Tom, had to be pushed into the team hauler by the crew chief as the crowd cheered wildly in support of Kenseth.

Although NASCAR chairman Brian France has championed on-track incidents, Kenseth could be sanctioned because he was not racing for the win.

“I think what was disappointing … a driver that’s not competing for a win, in fact, was many laps down when that happened, in our minds, that’s a little bit different than two drivers really going after it coming out of turn four for a win,” said Steve O’Donnell, head of NASCAR’s racing operations.

Denny Hamlin, who last week accused Kevin Harvick of deliberately causing an accident to preserve his spot in the Chase for the Sprint Cup championship field, said the level of aggression is out of hand. He’s teammates with Kenseth, and both were eliminated from title contention last week.

“It’s a no-holds-barred, Wild, Wild West,” Hamlin said. “The structure in which we have around us is not very strong as far as an authority figure saying, ‘No, you cannot do that anymore.’

“I love Brian France, but when he says that drivers are ‘doing what they have to do,’ it seems like he’s promoting this type of racing. That’s tough to crown a true champion when things go like this.”

Kenseth downplayed the incident, deadpanning it was a result of an earlier incident with Keselowski, who had led 143 laps as the two Team Penske teammates were the class of the field. Instead of celebrating a win and a spot in the Nov. 22 finale at Homestead-Miami Speedway, Logano is last in the eight-driver field and Keselowski is sixth.

There are two races remaining for the rest of the final four to be set, and Logano has a lot of work to do to make it back to the championship finale for the second year.

He was racing for his fourth consecutive victory, but there was a looming suspicion that Kenseth would get in the way.

Kenseth had been leading in the closing laps three weeks ago at Kansas when Logano spun him out of the way for the win. Kenseth has been furious since.

“I think what happened at Kansas is a completely different deal. We were racing for the win and he blocks you a few times and then we raced hard and he blocked me the last time and we spun out,” Logano said. “Here it was just a complete coward move, especially for a championship race car driver and race team. Just a complete coward. I don’t have anything else to say. It’s a chicken-you-know-what move to completely take out the leader when your race is over.”

The two drivers have not talked since Kansas, and even though they were in the care center together after the accident, there was no conversation.

“They won’t let me get to him,” Logano said about NASCAR.

Kenseth tried hard to dismiss the incident Sunday as a byproduct of earlier contact with Keselowski – a wreck that sent both Kenseth and Keselowski to the garage. But he was summoned to the NASCAR hauler after the race for a meeting that his crew chief and car owner Joe Gibbs attended.

Kenseth eventually revealed why the wreck happened at Martinsville, the first of three races to set the championship field.

“He’s got a couple races left, he’s got the best car, he might get a couple of wins here and still have a shot at it,” Kenseth said. He also indicated that payback had to be done.

“You never like to be in these situations. They really stink, to be honest with you, but sometimes you get put in these spots and you’ve got to try to keep respect in the garage area,” Kenseth said.

Gordon understood Kenseth’s frustration, and didn’t mind that he knocked the two best cars from the race and cleared the path for him to get to a pivotal victory lane.

The four-time NASCAR champion won for the first time this season and first time in 39 races. It was his 93rd career victory, ninth at Martinsville, and put him in position to ride into retirement with the long coveted fifth title. His last title was in 2001.

“That was clutch. That was huge,” he said. “Yeah, we had a few things that fell in our favor. But you’ve got to be there and be ready for that moment when it comes, and we were.”

© 2015 The Associated Press. All rights reserved. This material may not be published, broadcast, rewritten or redistributed. Learn more about our Privacy Policy and Terms of Use.