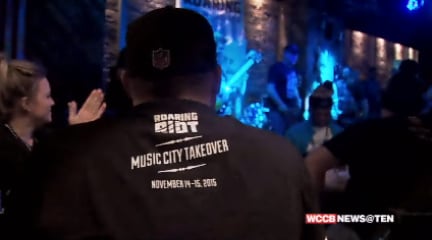 NASHVILLE, TN (WCCB Charlotte) — ‘Keep pounding’ chants could be heard all over Broadway Street in Nashville on Saturday night. Organizing the largest gathering of Panthers fans for this road game is Zack Luttrell, founder of an 11-chapter fan club called the ‘Roaring Riot’.

“It started Friday and tonight is where we really expect more,” Luttrell said. “There is a ton of energy in the city. As we are walking to different restaurants and bars we are getting high-fives and ‘go-Panthers’ (chants)”.

The Roaring Riot will have a block of nearly 300 fans in one section of Nissan Stadium on Sunday. They will have matching black shirts and will be waving black, ‘Cam-Wow’ towels…a play on sham-wow towels…during the game.

Carolina players have been noticing the passion from the fans even more this season. Cam Newton gave a ‘shout-out’ to the ‘Roaring Riot’ at his weekly press conference on Wednesday and defensive back Josh Norman said that Panthers fans have been noticeably louder–even on the road.

“That’s big time. If we can have as many fans as they have in their stadium, we could take it over. (Laughs) We can really take it over and we can have those fans yelling when their offense is on the field.”

Norman sat down with WCCB’s Morgan Fogarty as part of ‘The Get’ that will air in the near future.

Edge On The Clock: Blake Shelton To Host Drive-In Concerts At 300+ US Locations