Suspect Arrested And Charged With The Murder Of Justin Carr

During a news conference Friday morning, CMPD Chief Kerr Putney said Rayquan Borum was arrested by VCAT Friday in connection to the murder of Justin Carr. 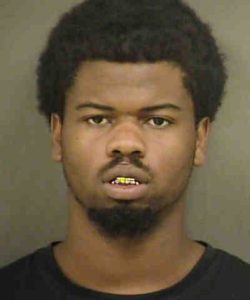 Officials say Borum was arrested around 7am and has been charged with the murder of Justin Carr outside of the Omni Hotel Wednesday night.

CMPD have released a statement on the shooting and death of Justin Carr:

Detectives with the Charlotte-Mecklenburg Police Department’s Homicide Unit are conducting a homicide investigation in the 100 block of E. Trade Street in the Central Division. The call for service came in at 8:31 p.m. on Wednesday, September 21, 2016.

Central Division patrol officers responded to an assault with a deadly weapon call for service. Upon officers arrival they located a male victim suffering from an apparent gunshot wound. The victim was transported by Medic to Carolinas Medical Center. On Thursday, September 22, 2016, the victim was pronounced deceased as a result of his injuries. The victim has been identified as Justin Carr, DOB: 07/21/1990. His family has been notified of his death.

Detectives with the Homicide Unit canvassed the area to determine whether there were any witnesses to this incident.

Crime Scene Search responded to the call for service to process the scene and collect physical evidence.

This is an ongoing, active investigation. As further information develops it will be released by CMPD Public Affairs.

Anyone with information about this incident is asked to call 704-432-TIPS and speak directly to a Homicide Unit Detective. Detective Pack is the lead detective assigned to the case. The public can also call Crime Stoppers at 704-334-1600 or visit the Crime Stoppers mobile app website at http://charlottecrimestoppers.com/.

Police say the man shot in the head during protests in Uptown Charlotte has died.

Family members have identified the victim as Justin Carr.

Carr’s mother posted a plea for peaceful protest on her Facebook page, and said, “my baby was shot in the head for no apparent reason!”

Original reports were that the shooting was civilian on civilian. Chief Putney says the investigation into the shooting is ongoing.

CHARLOTTE, N.C. — Sources tell WCCB a person was shot in the head during protests in Uptown Charlotte.

WCCB Crews were live in front of the Omni when the shot rang out.  MEDIC confirms the person was taken to CMC-Main with life threatening injuries.

Police have deployed flash bangs and people can be seen running down the streets.

Mom Worried Son Missing In Charlotte Could Be In Danger

Severe Storms, Tornadoes Cause Damage Across the South Monday

One Fatally Shot, Another Injured In Northwest Charlotte