Text2Win A Digital Copy Of ‘Deadpool 2’

Join the WCCB Text Club by sending WCCBVIP to 31403 by 2pm Tuesday, August 21st for your chance to win ‘Deadpool 2’ on Digital. Five winners will each receive ‘Deadpool 2’ via a digital download. ‘Deadpool 2’ is available now on Digital and on Blu-ray™ from August 21st!

After surviving a near-fatal bovine attack, a disfigured cafeteria chef (Wade Wilson) struggles to fulfill his dream of becoming Mayberry’s hottest bartender while also learning to cope with his lost sense of taste. Searching to regain his spice for life, as well as a flux capacitor, Wade must battle ninjas, the yakuza, and a pack of sexually aggressive canines, as he journeys around the world to discover the importance of family, friendship, and flavor – finding a new taste for adventure and earning the coveted coffee mug title of World’s Best Lover.

The Deadpool 2 Super Duper Cut now with 15 minutes of brand-new action and jokes lovingly inserted throughout is out now on Digital and on Blu-ray from August 21st. 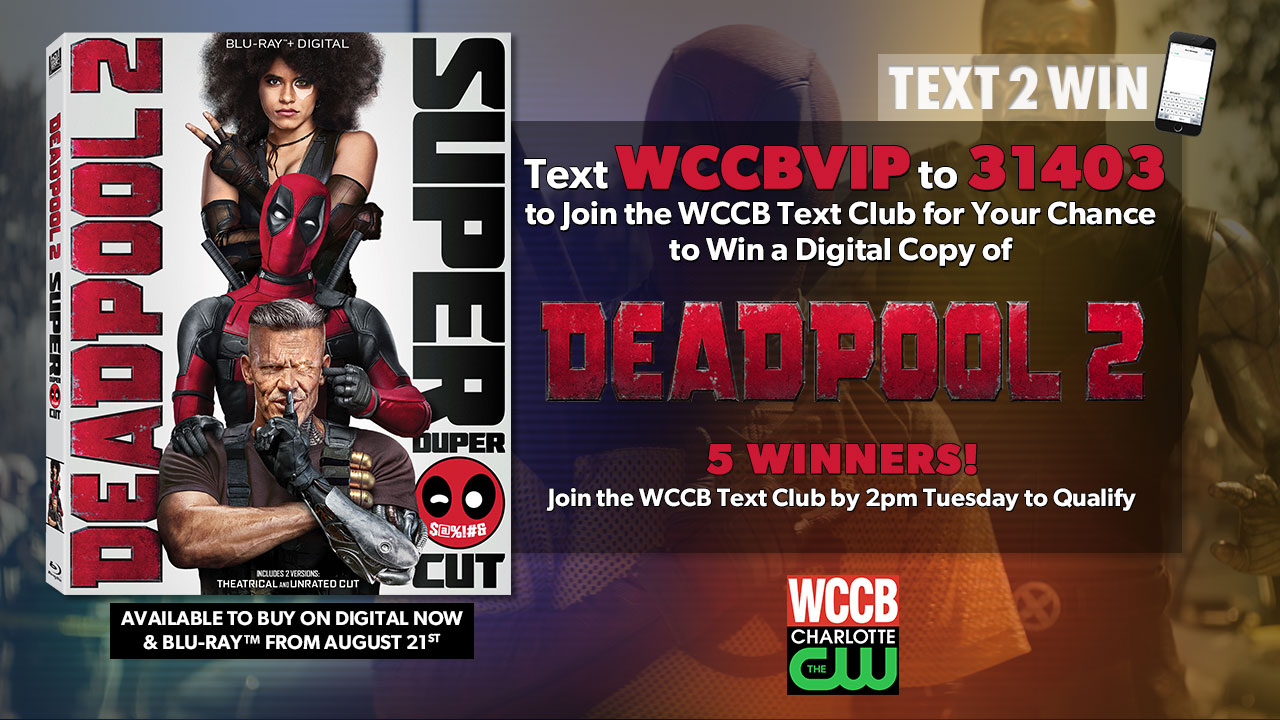 HOW TO WIN: No purchase necessary. Viewers must join the WCCB Text Club by 2pm Tuesday, August 21st, 2018 by texting WCCBVIP to 31403. Between 2pm and 3pm the same day, the VIP text club will receive a code word to text back for a chance to win. Winners will be randomly selected at 5pm and sent a confirmation text detailing how to claim the prize. No prizes will be mailed.

ELIGIBILITY: No purchase necessary. To win, you must be 18 years or older and a legal resident of North or South Carolina. No employee of Twentieth Century Fox and their affiliated artists and promoters (“Sponsor”) or WCCB-TV (“Station”), their affiliated companies, his or her spouse, or immediate family members and/or those living in the same household of each shall be eligible to win. Immediate family members include, but are not necessarily limited to, parents, brothers, sisters, nieces, nephews, aunts, uncles, cousins, and grandparents. Employees, or relatives of employees, of any television or radio station in the Charlotte Nielsen DMA or Charlotte Arbitron ADI are not eligible to win. Additionally, Station reserves the right to disqualify any other person from participation in the Contest where such participation would, in the sole opinion of Station, compromise or give the appearance of compromising the integrity of the Contest. No person shall be eligible to win any contest conducted by the Station more than one time in any sixty-day period.