The 22-year-old recorded two goals in 11 starts during the 2018 season for Jacksonville Armada FC.

“We really want to thank Jacksonville and Charlotte for their commitment to helping us get Derek to El Paso,” said USL El Paso General Manager of Business Operations, Andrew Forrest. “We know he will get the proper training in Charlotte and we look forward to watching him finish the season and are all wishing him a great playoff run.”

Before his Jacksonville debut, Gebhard played one season with Jacksonville United FC of the NPSL in the spring of 2015 and played one season with Florida Gulf Coast University in Fort Myers, Florida. In 2013 he was selected to the U.S Soccer Region III Olympic Development Program and helped lead his team to a 1-0 win over the Costa Rica U17 Men’s National Team and an overall 4-0-0 record in San Jose, Costa Rica. 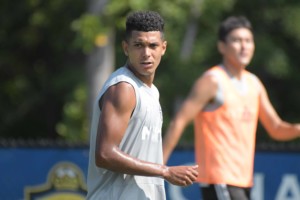 “Derek brings a lot of pace and good intensity in his play,” said Independence Head Coach Mike Jeffries. “For us, he’s an attacking guy with the ability to get in behind defenses and that’s been key. It’s been a little more difficult with Cordell [Cato] being out with an injury, so we haven’t had as much ability to run in behind groups. Derek is certainly a guy who has that ability.”

Gebhard and the Independence will next be in action this Saturday, September 1st as Nashville SC visits the Sportsplex at Matthews. Kickoff is scheduled for 7:30 PM ET. Additionally, the Independence are preparing to host Mexican Champions Santos Laguna for an international friendly on Wednesday, September 5th. All Preferred Sideline seating options are sold out, but tickets are still available by calling 704-206-1515 or purchasing online at charlotteindependence.com.