BEIJING (AP) — Taking a page from the U.S. president’s own playbook, China on Thursday denounced a U.S. newspaper report that it is listening to Donald Trump’s phone calls as “fake news,” and suggested he exchange his iPhone for a cellphone made by Chinese manufacturer Huawei.

Foreign Ministry spokeswoman Hua Chunying did not provide any evidence or cite any specifics in her dismissal of the report in The New York Times. China tightly censors domestic media and routinely rejects critical foreign media reporting about the ruling Communist Party as biased or fabricated. 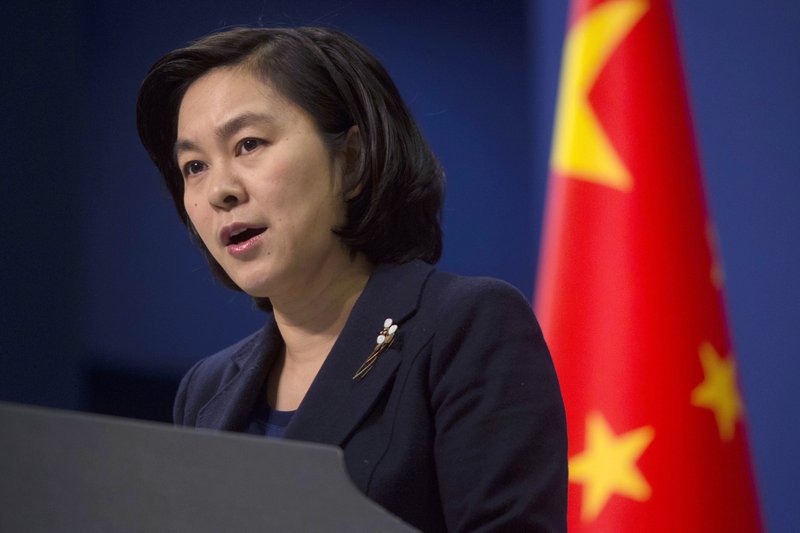 Hua told reporters that the journalists behind the report “are sparing no efforts to win the Academy Award for best screenplay.”

In accusing the newspaper of fabricating news, Hua echoed language used by Trump, who has often accused the New York Times of making up stories.

“Secondly, I suggest they replace their iPhone with Huawei ones if they are really concerned about security issues,” Hua said.

A 2012 report by a congressional panel said Huawei’s equipment was a security risk and the U.S. has banned government personnel from using the company’s devices.

If the U.S. is still concerned about security, Trump could “abandon all modern communication devices and cut off contact with the outside completely,” Hua said.

The Times reported that American intelligence reports said Chinese and Russian spies are listening in when Trump calls friends on one of his iPhones and is using the information to try to influence him and impact administration policy.

Trump pushed back against the idea that he uses insecure cellphones, tweeting Thursday that he only uses government phones “and have only one seldom used government cell phone.”

“The phone is rotated on a regular basis and is constantly monitored for any security vulnerabilities and attacks, in accordance with recommendations from the intelligence community.”

China has long been accused of efforts to target U.S. government, military and commercial entities with cyberattacks. In 2015, a massive hack of the federal Office of Personnel Management, widely blamed on China’s government, compromised personal information of more than 21 million current, former and prospective federal employees, including those in the Pentagon.

Trump and U.S. Vice President Mike Pence have also recently accused China of seeking to interfere in the upcoming midterm elections. They say Beijing wants to undermine the president’s campaign to force China to make concessions on trade and investment terms. The administration has not provided any evidence to back-up such accusations.

At a multinational defense forum in Beijing on Thursday, Defense Minister Wei Fenghe denied any implication of Chinese meddling.

“We strongly urge the U.S. to correct its wrongful statement and refrain from harming bilateral relations,” Wei said.