An associate professor from the Gardner-Webb University School of Divinity recently attended a series of Baptist-Catholic meetings held in Rome, Italy. The Rev. Dr. Steven R. Harmon was among representatives of the Baptist World Alliance (BWA) who met with the Pontifical Council for Promoting Christian Unity. 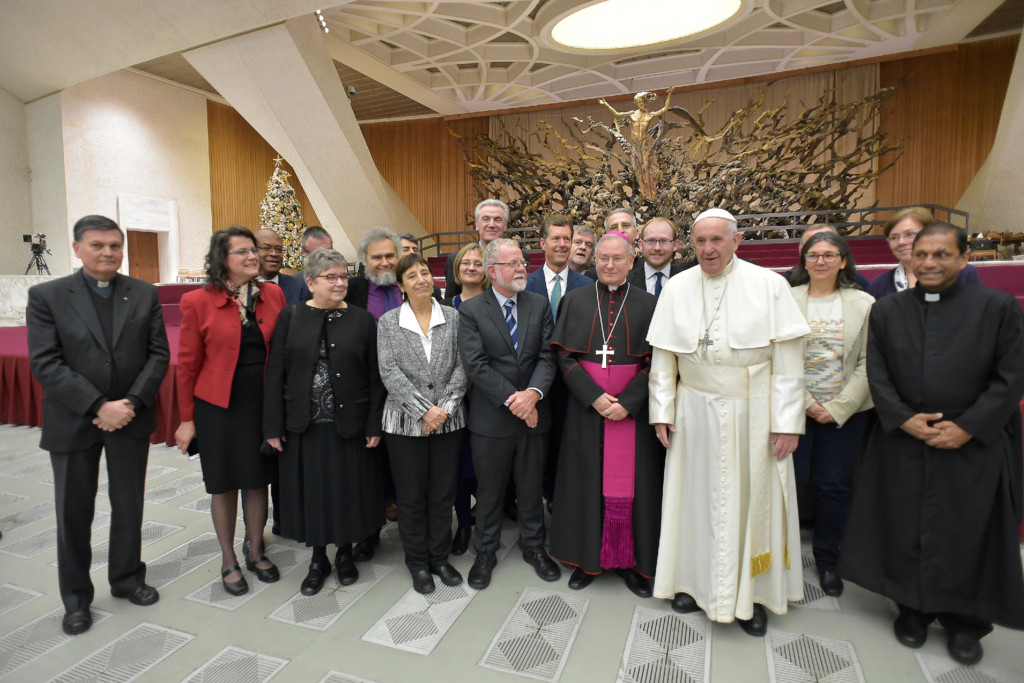 Vatican Photography Service – Rev. Dr. Steven R. Harmon was among representatives of the Baptist World Alliance and the Pontifical Council for Promoting Christian Unity who visited with Pope Francis during the general papal audience. (Harmon is on the second row, the second person to the left of the Pope.)

Included in the week of ecumenical conversations was a meeting with Pope Francis during the general papal audience. “When we met Pope Francis, we were impressed with his genuine joyfulness,” Harmon reflected. “He greeted us by imploring, ‘Pray for me!’ and we assured him that we do and would continue to do so. He also said to us, ‘We must find a way to get together, or they will eat us raw!’ We interpreted this to mean something like, ‘If we don’t find a way to live in unity, the enemies of the gospel will eat us alive!’”

Harmon, who teaches historical theology at Gardner-Webb, served as the secretary for the Baptist delegation co-chair, the Rev. Dr. Frank Rees, associate professor and chair of the Academic Board at the University of Divinity in Australia. The Catholic delegation was led by co-chair, Bishop Arthur Serratelli, Bishop of Paterson, N.J.

The theme for the meeting was “Context of Common Witness.” Members of the joint commission and guest observers were commissioned to present papers on five geographical contexts in which they envision Baptists and Catholics bearing witness to Christ together: Europe, North America, Latin America, Africa and Asia.

Since 1984, the BWA and the Catholic Church have participated in several joint meetings. Harmon served as a member of the Baptist delegation from 2006 to 2010. The Baptist-Catholic group is set to convene again in December 2019 in Warsaw, Poland, and will meet annually through 2021.

As conversations between the two groups have pursued common ground, Harmon observed, “May God help us to find a way to get together, through Jesus Christ our Lord, that the world might be transformed by the good news God has made known in Christ.”