BLACKSBURG, V.A. — Ty Outlaw caught a pass from driving teammate Wabissa Bede, set himself and fired away with a tiebreaking 3-pointer.

The way No. 20 Virginia Tech executed Tuesday, even Zion Williamson might not have made a difference.

Outlaw hit his big shot with 1:28 left and the Hokies beat No. 3 Duke 77-72 on a night when Williamson, the Blue Devils’ star freshman, watched in street clothes for the second straight game because of a sprained right knee. 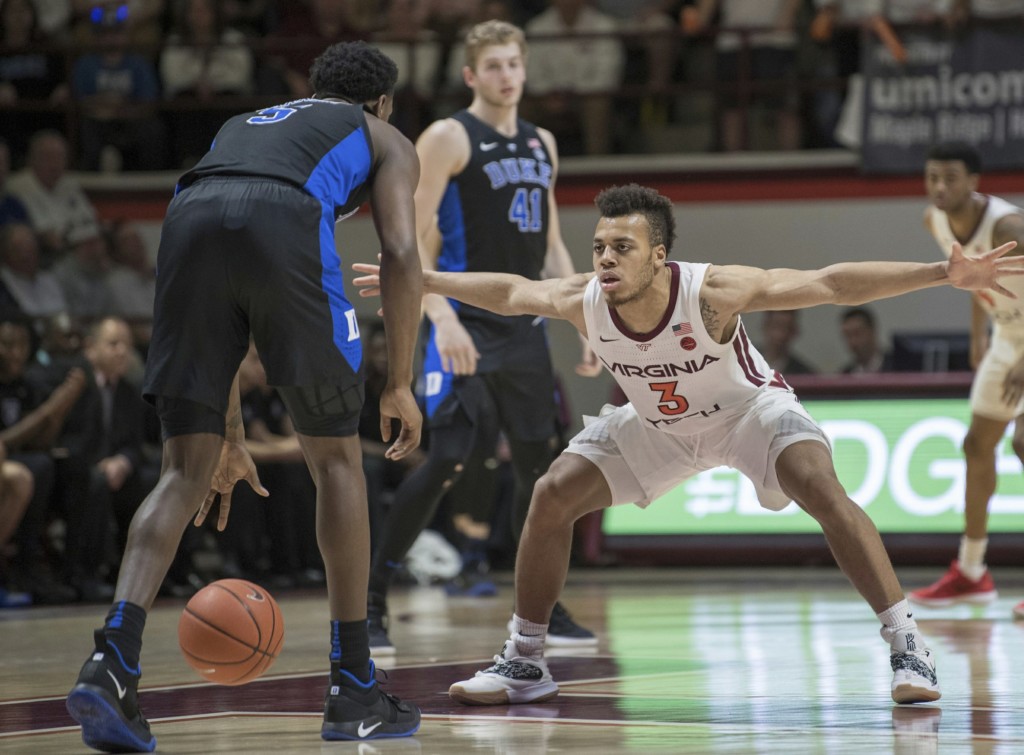 Bede pulled three defenders toward him as he powered toward the basket, leaving Outlaw completely uncovered.

“I just drove and he was open,” a grinning Bede said. “Everybody knows Ty’s going to knock that down. He’s clutch. Once he let go of it I knew it was going to go in.”

Outlaw said most of the credit went to Bede, who has been pressed into extensive point guard duty because the Hokies’ floor leader, Justin Robinson, missed his eighth straight game with a left foot injury.

“Even better (than the shot) was the pass from Bede,” Outlaw said. “I think he was great tonight, probably one of his best performances, and it couldn’t have come at a better time.”

Kelly Blackshear Jr. had 23 points and 10 rebounds, and Ahmed Hill scored 17 points for Virginia Tech (22-6, 11-5 Atlantic Coast Conference), which beat Duke at Cassell Coliseum for the third straight time. The Blue Devils (24-4, 12-3) had been the only team in the country yet to lose on the road this season, but Duke hasn’t won at Virginia Tech since Feb. 25, 2015.

RJ Barrett scored 17 of his 21 points in the second half, but it wasn’t enough to keep the Blue Devils from dropping out of a first-place tie with No. 2 Virginia and No. 5 North Carolina in the ACC. Cam Reddish added 17 points as Duke dropped its second in three games, including an 88-72 loss to UNC when Williamson was injured in the opening minute on Feb. 20.

“Today they got the better of us,” Barrett said.

Krzyzewski said Barrett was sick the entire first half, and “for him to play that way in the second half was remarkable.”

The Hokies seemed to have taken control with a 9-2 run to open a 68-61 lead with 4:32 to play, but two free throws by Barrett sparked a 9-2 run for the Blue Devils to knot it at 70 with 1:51 to play. Outlaw’s 3 from the right wing followed, and after Reddish missed at the other end, Nickeil Alexander-Walker was fouled and made both free throws for the Hokies. Alexander-Walker had 13 points and six assists.

Tre Jones scored with 12 seconds left, but Blackshear made a pair of free throws with 11.4 seconds left to clinch it.

Hokies coach Buzz Williams has said many times he’s not popular enough with his peers to win a conference coach of the year award, and he said that he’s fine with that. But Krzyzewski was effusive in his postgame praise for his counterpart.

“Buzz has done an amazing job with his team,” Krzyzewski said. “Losing Justin and playing this month without him, I don’t think there’s anybody who’s done a better job with his team than he has. Terrific job by him.”

Williams is 3-3 in matchups against the Blue Devils.

Duke: Barrett came into the game averaging 28.7 points in his last three games. But he didn’t make a field goal until his seventh attempt in the final seconds of the first half. He had four points at halftime, but made a driving shot 16 seconds into the second half and took over for the Blue Devils. Meanwhile, Jack White’s string of consecutively missed 3-point shots climbed to 28 with a 0-for-3 effort.

Virginia Tech: The Hokies played their eighth game without floor leader and point guard Justin Robinson and had only 12 assists on 23 made field goals. But none was bigger than Bede’s find of Outlaw, one of the most dangerous 3-point shooters in the country. Outlaw is 36 for 86 from behind the arc in ACC play (41.8 percent).

Virginia Tech: The Hokies play at No. 18 Florida State on Tuesday night.