Confederate Statue Being Removed In Winston-Salem

WINSTON-SALEM, N.C. (AP) — A construction crew was preparing to take down a Confederate statue in Winston-Salem, North Carolina, Tuesday morning, a rare move in a state where such monuments are largely protected by law.

Two cranes were set up on either side of the statue in Winston-Salem and traffic was blocked on a main downtown thoroughfare. 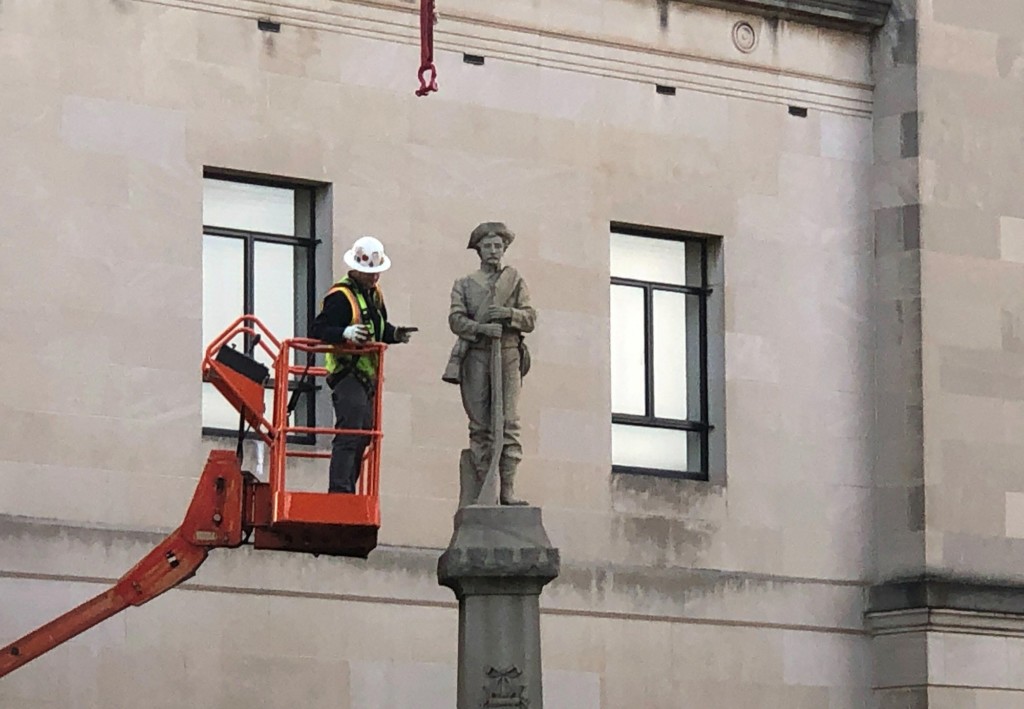 A workman prepares a Confederate staute for removal, Tuesday, March 12, 2019, in Winston-Salem, N.C. Crews began removing the Confederate statue Sunday from the grounds of an old courthouse. North Carolina has been at the forefront of the debate over what to do with Confederate monuments as one of three southern states with the most statues, according to the Southern Poverty Law Center. (AP Photo/Tom Foreman Jr.)

At one point, a worker on a cherry picker was raised up to the top of the statue and appeared to be looking at how to attach a chain or harness.

“Work has started and hopefully it will be removed by end of the day,” City Manager Lee Garrity said in an email.

Several onlookers were out, and temporary concrete barriers were blocking traffic in several directions.

Standing across the street from the statue, Howard Snow said the city was wasting money by taking the statue down and that the money could be put to better use.

Winston-Salem had more leeway than most North Carolina cities because the old courthouse property had passed into private hands. A 2015 North Carolina law all but prohibits the permanent removal of Confederate statues from public land.

In January, judge denied a request by the United Daughters of The Confederacy for a temporary restraining order to prevent the removal of the statue. Winston-Salem city officials had given the group until the end of that month to move the statue from the grounds of the building that now houses apartments, or the city would remove the monument itself. The mayor has proposed moving it to a cemetery.

North Carolina has been at the forefront of the debate over what to do with Confederate monuments as one of three southern states with the most statues, according to the Southern Poverty Law Center. A state tally shows Confederate monuments are located at contemporary or historic courthouses in about half of the state’s counties.

Some statues had been relocated by North Carolina cities in the years before the 2015 law went into effect, but since then, local governments have been all but blocked from doing so under the law that allows relocation only in very narrow circumstances. Two North Carolina Confederate statues have been torn down by protesters.

Critics argue many Confederate statues were built decades after the Civil War to promote white supremacy. Supporters counter that the monuments are simply memorials to ancestors who fought and died protecting their homes.

In Durham, east of Winston-Salem, city and county officials are studying what to do with a Confederate statue torn down by protesters in 2017 in the aftermath of a deadly white nationalist rally in Virginia. A panel recommended moving the crumpled statue into an indoor display.

And leaders of the state’s public university system have given themselves a March deadline to figure out where to put a statue torn down on the grounds of the University of North Carolina at Chapel Hill. Protesters toppled that statue in late 2018.

Resolving the fate of the statues has been complicated by a 2015 state monuments law that forbids relocation of Confederate monuments on public land unless narrow circumstances are met.

United Daughters of The Confederacy lawyers unsuccessfully argued in court papers earlier this year that the sale of the Winston-Salem courthouse left the public monuments in the hands of Forsyth County, so removal would violate the state law.

But City Attorney Angela Carmon countered in a letter saying the monument and land under it remain privately owned because neither the county never took required steps to take ownership. County officials have said they don’t own the statue, and the current owner of the property agrees the statue should be removed.

Carmon said in the same letter that the statue’s presence makes it impossible to preserve the statue or protect public safety. The statue has been vandalized twice since late 2017 and critics and supporters gathered for a tense rally around the statue in January.

The approximately 30-foot (9-meter) high monument includes a granite statue atop a base and column and was dedicated in 1905. It depicts an anonymous soldier in a Confederate uniform resting his rifle stock against the ground.

The Southern Poverty Law Center said 115 Confederate statues have been taken down across the U.S., a sign that they are losing favor.