JACKSONVILLE, Fla. — If you didn’t know who Fletcher Magee was before, you should now.

Magee set the Division I career record for 3-pointers, poured in 24 points and led seventh-seeded Wofford to an 84-68 victory over Seton Hall in the first round of the NCAA Tournament on Thursday night.

“The kid can shoot it,” teammate Cameron Jackson said. “When he’s open, I’m happy when he shoots it.” 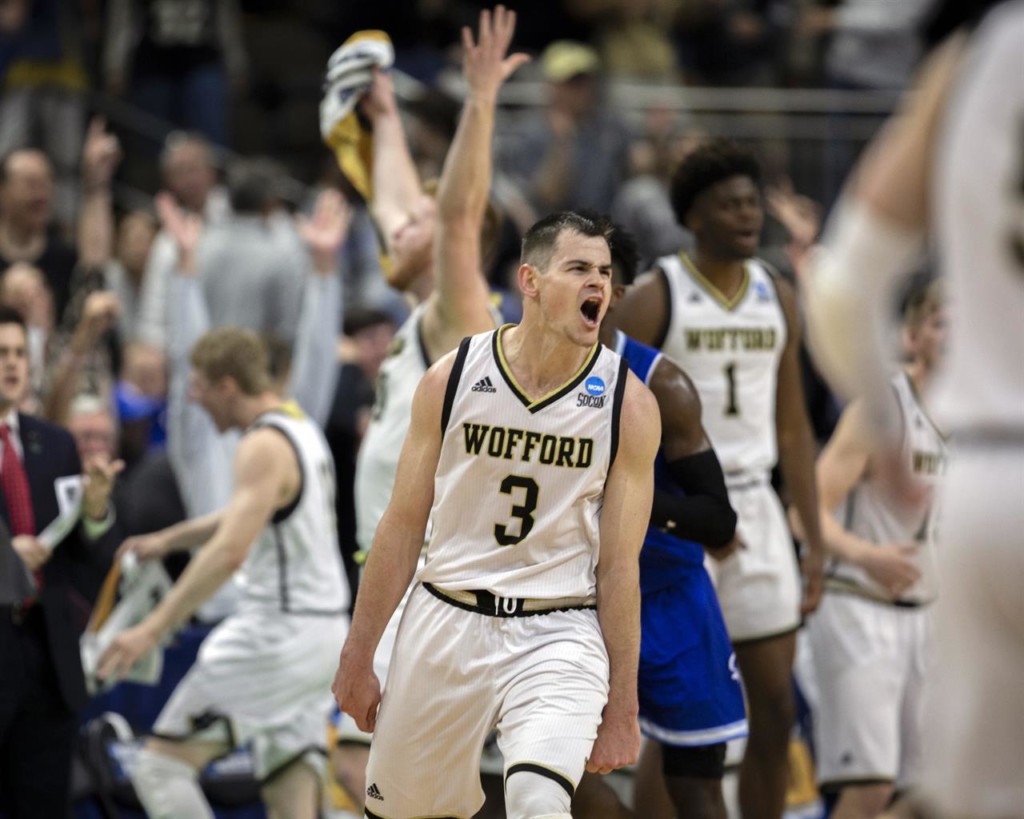 Magee tied the mark on a four-point play in the first half and broke it in the opening minute of the second half.

“I definitely noticed the crowd was louder than just the normal 3,” Magee said. “But I feel like I didn’t get too caught up in it. It was a close game. I was just focused on doing whatever I could to help us continue to stretch our lead and win down the stretch. I feel like I was aware of it, but I just kind of blocked it out and tried to focus on winning.”

Extending his record might not be easy against second-seeded Kentucky in the Midwest Region on Saturday. The long, lanky Wildcats tend to give opponents fits, especially from behind the arc.

Then again, Magee is no ordinary shooter .

The 6-foot-4 guard was 7 of 12 behind the arc, none bigger than his third of three 3s from the corner in front of Wofford’s bench in the second half. The first two were wide-open looks that caused Seton Hall coach Kevin Willard some angst, and the third a contested shot that brought the Wofford faithful to their feet and put the Terriers up 76-66 with three minutes to play.

“We ran the same play to get it over there,” Magee said, “and I felt like I was pretty open, so I decided to let it go.”

It was quite a show about two hours north of Magee’s hometown of Orlando. He had about 75 friends and family members on hand for the performance.

Powell helped Seton Hall overcome a 12-point deficit in the second half, and he even put his team ahead 54-53 with about 10 minutes to go. But it was all Wofford late, going on a 17-0 run in the closing minutes before Seton Hall managed a meaningless dunk at the end.

“That’s a heck of a basketball team we played,” Willard said. “When you have a senior-laden team like they do, who’s extremely well-coached, you’re going to have to play really good to beat them.”

Seton Hall got into the NCAA Tournament thanks to wins over Kentucky, defending national champ Villanova and Marquette (twice). The Pirates played well in all of those games, but they looked nothing like that against the Terriers. Three issues doomed them: lousy 3-point shooting (9 of 27), free-throw shooting (9 of 15) and turnovers (13).

Wofford, with an enrollment of 1,650, keeps making history. The Terriers became the smallest school to be ranked in the Top 25 since VMI in 1977, and now have their first tournament victory.

Seton Hall waits to see whether Powell enters the NBA Draft. The junior guard averaged 23 points this season, ranking 10th in the nation, and was voted first-team All-Big East.

Wofford gets the mighty Wildcats on Saturday. Kentucky will likely be without leading scorer and rebounder PJ Washington, who sat out his team’s win over Abilene Christian with an injury.