CHARLOTTE, N.C. — Kemba Walker may be a three-time All-Star, but he’s not having any problem playing with young players like Dwayne Bacon and Miles Bridges as the Charlotte Hornets enter the homestretch of the season.

In fact, he’s embracing the opportunity, even feeding off them.

“Man, they play hard. They have great energy,” Walker said. “I don’t know if I can keep up with them, to tell you the truth. They are out there moving so fast. It’s the future of this organization and I’m trying my best to be the best leader I can be for those guys. When adversity hits, these guys they are looking at me.” 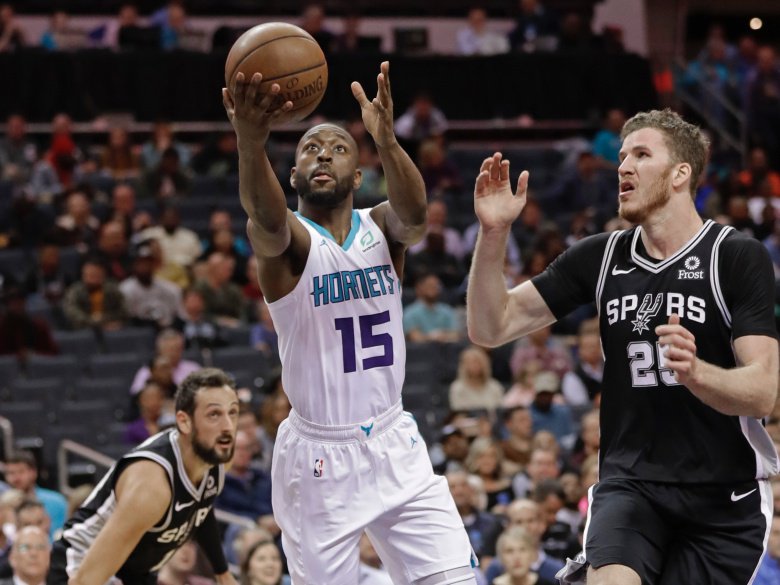 They looked at Walker on Tuesday night in overtime and he responded in a big way.

Walker scored 11 of his 38 points in the extra period to lead the Hornets to their season-high fourth straight win, 125-116 win over the San Antonio Spurs. Walker scored Charlotte’s first seven points in the extra period, and went 4 of 4 from the field with a pair of clutch 3s. He barely missed his third career triple-double, finishing with 11 assists and nine rebounds as Charlotte won its first overtime game in five tries.

Hornets coach James Borrego said Walker loves to hang around with the young guys off the court, calling him a “kid at heart, too.”

He said Walker’s trust in the young players has elevated the play of the entire team. That showed in overtime when Walker, exhausted from his extensive effort to start the extra period, deferred to Bacon, who made a big 3-pointer to push the lead to seven.

“When you get a young guy out there with All-Stars sometimes it takes a while to trust,” Borrego said. “But there was immediate trust with Kemba and I think the young guys felt that and they have responded to it.”

Said Walker: “These guys are growing up right before our eyes.”

Bacon and Bridges certainly are.

Bacon established a career-high for the second straight game, pouring in 24 points with four 3-pointers. Bridges had 10 points early on and a key block in overtime. Devonte Graham is playing well behind Walker.

Frank Kaminsky, once an afterthought on the roster, is stepping up, too, adding 15 points and 10 rebounds off the bench for the Hornets, who pulled within a 1 1/2 games of the Orlando Magic in the battle for the eighth spot in the Eastern Conference. Orlando beat Miami on Tuesday night.

DeMar DeRozan had 30 points to lead the Spurs, but missed a jumper at the end of regulation that would have won the game. LaMarcus Aldridge had 20 points and 15 rebounds, and Marco Belinelli had 17 points and 10 rebounds for the Spurs.

The Spurs entered the game tied with Oklahoma City for the seventh-best record in the West.

Spurs coach Gregg Popovich said lack of consistency on the road — particularly on defense — has become a problem.

“We just don’t play the same defense a lot of the time, we are not consistent defensively,” Popovich said. “If a team scores 120 points when we are on the road it is going to be hard for us to win a game.”

Hornets: Jeremy Lamb, who hit a game-winning, half-court shot to beat Toronto on Sunday night, left the game with a sprained right ankle in the third quarter and did not return. He walked out of the locker room after the game without a limp and the injury did not appear to be serious. … Nic Batum (illness) did not play.

Tony Parker was active for the game, but did not sit on the Hornets bench against his former team. He hasn’t played in the last five games as Borrego has gone with youth.

“We are going with these young guys right now,” Borrego said. “Devonte (Graham) is playing well right now, and Tony is on board. He’s staying ready.”

The Hornets threw a zone defense at the Spurs in the second half and it appeared to throw off their rhythm on offense.