OAKLAND, C.A. — Towel around his neck, Stephen Curry raised both arms and pointed to the crowd with appreciation.

Curry and Steve Kerr realize the importance of small steps on the way to deep postseason runs and hanging championship banners.

One down. Many important victories still ahead in Golden State’s quest to three-peat.

Curry scored 25 points with five 3-pointers and the Warriors beat Charlotte 137-90 on Sunday night to clinch their fifth straight Pacific Division title and hand the Hornets their worst loss of the season.

“Obviously when you’re scoring like we were tonight it’s fun for everybody, no matter who’s finishing the possessions,” Curry said.

Splash Brother Klay Thompson scored Golden State’s initial nine points and finished with 24 and six 3s on a night Kerr could give his regulars a rest and better prepare the backups for the playoffs with more minutes. Curry and Thompson combined to shoot 11 for 17 from deep and 17 of 30 overall. 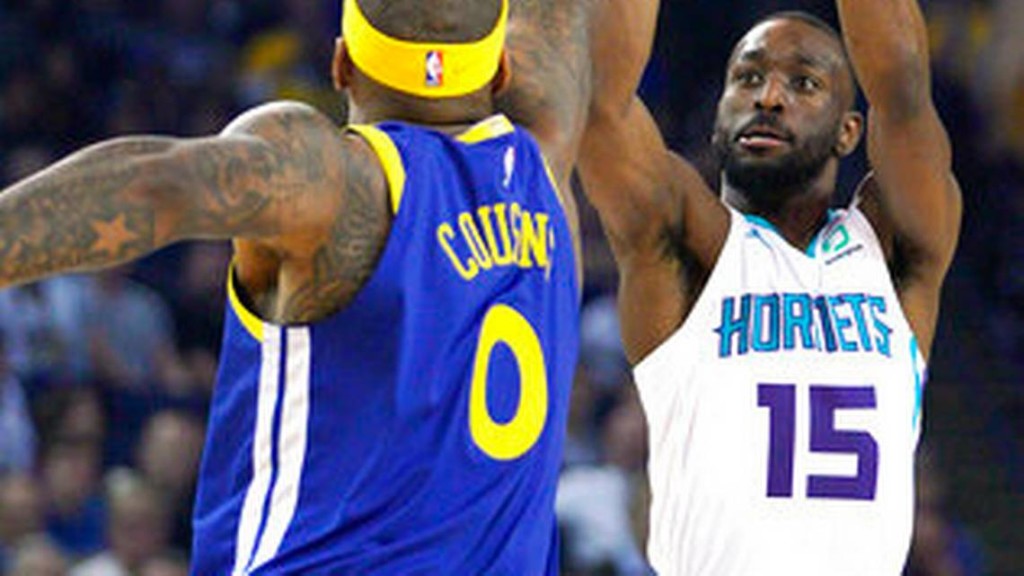 The Warriors took charge from the opening tip and took it to the Hornets as the two-time defending champions returned to the court for the first time since a 131-130 overtime loss Friday at Minnesota in which Golden State took exception to multiple late calls.

Starting Warriors center DeMarcus Cousins, who had 24 points and 11 rebounds in a 121-110 win at Charlotte on Feb. 25, was ejected with 6:09 left in the second quarter for a Flagrant 2 foul against Willy Hernangomez. Cousins scored eight points and blocked three shots in 11 minutes.

Kerr said Cousins inadvertently hit Hernangomez in the head with a closed fist trying to box him out, but “there wasn’t any malice intended.”

“I didn’t see any fight out there tonight,” Hornets coach James Borrego said. “We gave into their offense tonight. … We made mistakes. We left Curry alone a few times, and you can’t do that.”

Charlotte leading scorer and All-Star Kemba Walker was held to nine points for his third game of the season not reaching double figures.

Draymond Green whooped and hollered in the locker room with some serious school pride.

“Great day to be a Spartan!” Green said after Michigan State’s 68-67 NCAA Tournament victory over top-seeded Duke to reach the Final Four.

Curry walked past his teammate after warmups and offered, “Congratulations, Spartan.”

“I’m not surprised, I actually thought that we could do it,” Green said. “Duke has a lot of firepower, but it has gaps. An experienced team, and an experienced coach, can exploit those gaps.”

“At this critical age, seek to be the best version of yourself. You can look around and get inspiration from a lot of incredible women, but you also have to value and love who you are,” said Gottlieb, whose Cal women reached the second round of the NCAA Tournament before losing to Baylor. “Who you are and what you care about, be true to that. . If you’re inspired to think about what’s possible for you, that’s what today is about. You can have it all. It’s out there for you as women.”

Hornets: Charlotte scored 61 points off the bench. … The Hornets shot 8 of 32 from 3-point range. … The Hornets’ previous worst loss was by 38 on two occasions.

Hornets: At Utah on Monday to complete a back-to-back and Charlotte’s third game of a four-game road trip.