Join the WCCB Text Club by sending WCCBVIP to 31403 by 2 PM Monday, April 22nd for your chance to win M. Night Shyamalan’s “Glass” Trilogy on Blu-ray + DVD + Digital. Five winners will each get a copy that includes “Unbreakable,” “Split” and “Glass.” “Glass” is available on Blu-Ray™, DVD & Digital from April 16th!

Writer-Director M. Night Shyamalan (The Sixth Sense, Signs) completes a mind-bending trilogy created nearly twenty years ago with GLASS, a comic book thriller available on April 16, 2019, from Universal Pictures Home Entertainment. GLASS is a grounded-in-reality, comic-book thriller where the heroes and villains are people first. The thrilling culmination to the trilogy that started with Unbreakable and Split, stars James McAvoy (Split, Atonement), Samuel L. Jackson (Hitman’s Bodyguard, Avengers Franchise), Bruce Willis (Unbreakable, Die Hard), Sarah Paulson (Ocean’s Eight, “American Horror Story”) and Anya-Taylor Joy (Split, The Witch). Go inside the mind of master of suspense M. Night Shyamalan to uncover the connections and references that bring the three films together in one universe. Experience more than sixty minutes of never-before-seen features elaborating on his process and artistic vision including an in-depth look at the making of the film, deep insights on the characters, a never-before-seen alternate opening, and deleted scenes.

GLASS features “Shyamalan’s eccentric, intimately scaled superhero universe” (Manohla Dargis, The New York Times), while offering a closer look at the world of the Elijah Price, also known as Mr. Glass (Jackson), David Dunn (Willis), and Kevin Wendell Crumb (McAvoy) as they experience a series of escalating encounters as they escape from an asylum and embark on a thrilling battle of good versus evil. Producers M. Night Shyamalan, Jason Blum (Get Out, Halloween), Marc Bienstock (Before I Fall), Ashwin Rajan (Devil, The Visit) and executive producer Steven Schneider (Paranormal Activity series) reunite with GLASS for “one of the most original comic book movies in recent years” (Scott Menzel, We Live Entertainment). 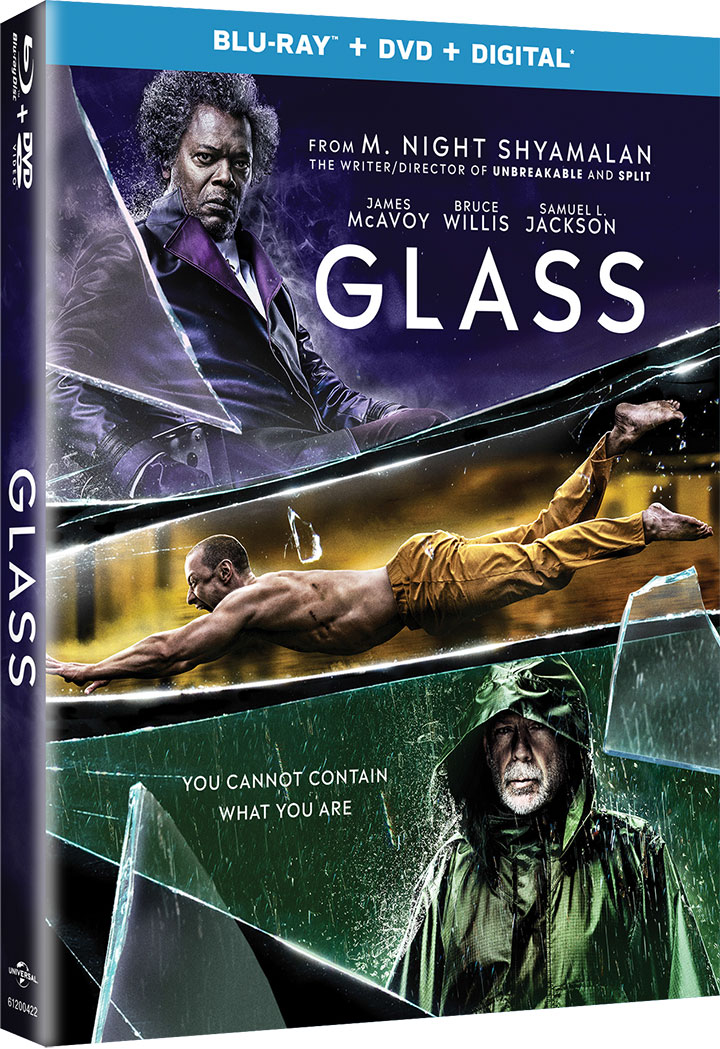 HOW TO WIN: No purchase necessary. Viewers must join the WCCB Text Club by 2PM Monday, April 22nd, 2019 by texting WCCBVIP to 31403. Between 2PM and 3PM the same day, the VIP text club will receive a code word to text back for a chance to win. Winners will be randomly selected at 5pm and sent a confirmation text detailing how to claim the prize. No prizes will be mailed.

ELIGIBILITY: No purchase necessary. To win, you must be 18 years or older and a legal resident of North or South Carolina. No employee of Universal Pictures Home Entertainment, RKP Media and their affiliated artists and promoters (“Sponsor”) or WCCB-TV (“Station”), their affiliated companies, his or her spouse, or immediate family members and/or those living in the same household of each shall be eligible to win. Immediate family members include, but are not necessarily limited to, parents, brothers, sisters, nieces, nephews, aunts, uncles, cousins, and grandparents. Employees, or relatives of employees, of any television or radio station in the Charlotte Nielsen DMA or Charlotte Arbitron ADI are not eligible to win. Additionally, Station reserves the right to disqualify any other person from participation in the Contest where such participation would, in the sole opinion of Station, compromise or give the appearance of compromising the integrity of the Contest. No person shall be eligible to win any contest conducted by the Station more than one time in any sixty-day period.

6) Winners will be notified by text no later than 6PM on Monday, April 22nd, 2019 with instructions on how to claim the prize. Winners must claim the prize by 5PM on Wednesday, May 22nd, 2019 or the prize will be forfeited. No prizes will be mailed. Please don’t come to the station unless instructed to do so.