NEW YORK, N.Y. — Outplayed for much of the first two periods while losing players to injuries, the Carolina Hurricanes scored two quick goals early in the third period and held on for another big road victory.

Warren Foegele and Nino Niederreiter scored 48 seconds apart to rally the Hurricanes to a 2-1 victory over the New York Islanders on Sunday and a 2-0 series lead in the Eastern Conference semifinals.

“We knew we had to make sure to come out hungry going to the third period,” Niederreiter said. 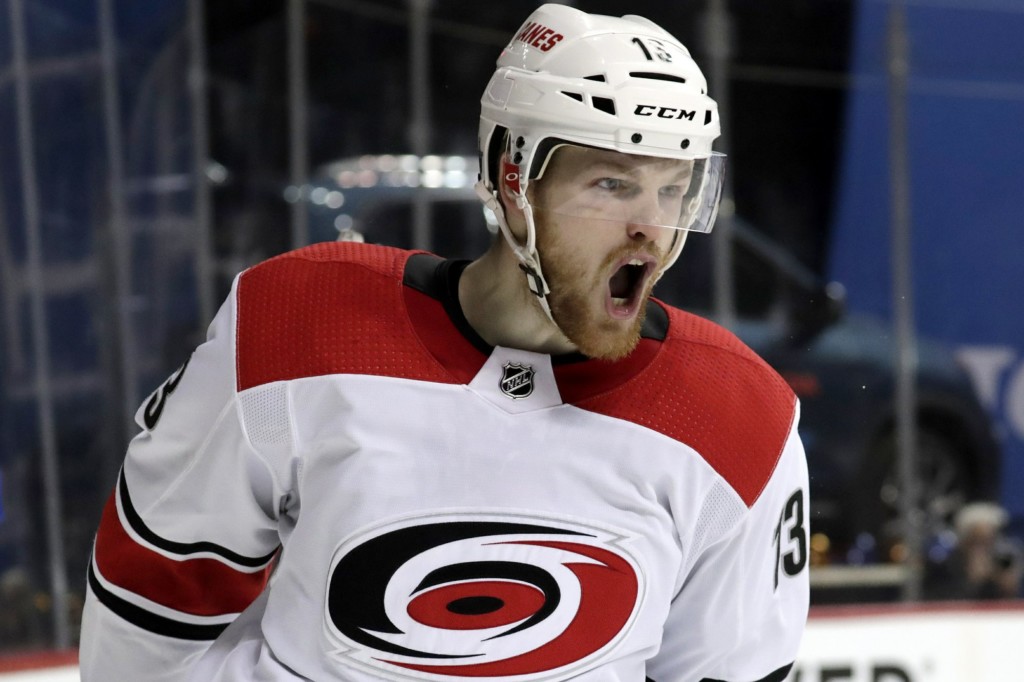 Petr Mrazek stopped nine of 10 shots he faced before leaving with an injury 6 1/2 minutes into the second period. Curtis McElhinney came on and finished with 17 saves to help Carolina win for the sixth time in its last seven playoff games.

“He’s been huge,” Foegele said about McElhinney. “It’s not easy coming off the bench there and haven’t faced a shot for 30 minutes or so and come up big with some stellar saves.”

The Hurricanes opened the first round with losses at Washington, before evening the series at home. They then lost Game 5 on the road before tying it at home again and then winning a marathon Game 7 on the Capitals’ ice in two overtimes to advance.

Now, after winning two in New York, they’re heading home with the series lead and a chance at a sweep if they can win the next two.

“It’s huge taking two on the road here,” Foegele said. “We just got to focus, regroup and worry about the next game. Last series we were down 2-0 and we knew we had to come back, so they’re definitely going to be thinking that right now.”

Mathew Barzal scored and Robin Lehner made with 16 saves for the Islanders. New York, which had home-ice advantage in a seven-game series for the 15th time, has opened with two losses for the first time.

“We were much better than the night before (in Game 1),” Islanders captain Anders Lee said. “Now we got to go into their building and do what they did to us.”

The Hurricanes also lost defenseman Trevor Riemsdyk to a shoulder injury in the opening minute of the game, and forward Saku Maenalanen to an upper body injury in the third.

Trailing 1-0 after two periods, the Hurricanes took the lead early in the third. Foegele tied, taking a pass from Lucas Wallmark and beating Lehner inside the right post from the right faceoff dot 17 seconds in. It was his fifth goal of the postseason.

Niederreiter, who began his career with the Islanders and had an assist on Jordan Staal’s winner in OT in Game 1, put the Hurricanes ahead when he redirected a shot by Teuvo Teravainen for his first of the playoffs at 1:05.

McElhinney stopped a shot by Anthony Beauvillier 5:15 into the third, and then stuffed a try by Barzal with just under 11 minutes left.

Then, with New York on a power play, McElhinney saved Josh Bailey’s attempt from the left doorstep to preserve the lead. After the penalty expired, Jordan Eberle’s shot from in front hit the crossbar and stayed out with 7 1/2 minutes remaining.

The Islanders’ Ryan Pulock also hit the crossbar with 1:02 left.

“We had some looks,” Bailey said. “Hit a couple of posts in the third. It could have been a different game, but that’s hockey sometimes.”

The Hurricanes had a two-man advantage for 1:25 early in the second after Eberle and Scott Mayfield were both called for slashing penalties, but couldn’t get any shots on goal during the 5-on-3.

Mrazek was replaced by McElhinney during a broadcast timeout 6:27 into the middle period. The Hurricanes later announced he had a lower-body injury.

McElhinney, making his first appearance of the postseason, stopped an attempt by Matt Martin and ensuing follow by Mayfield near the midpoint of the period, and then had a nice glove save on another try by Mayfield later in the period to keep the Hurricanes within one.

Devon Toews appeared to double the Islanders’ lead with 15 seconds to go in the second after the rebound of his backhander went in off his skate. However, the goal was waved off by the officials for kicking the puck in.

Barzal gave the Islanders a 1-0 lead with his first career playoff goal, a power-play score with 6:43 left in the opening period. Barzal got the puck on the left side of the net and sent a pass across the crease toward Josh Bailey, but the puck deflected off the stick of Hurricanes defenseman Jaccob Slavin and up into the top right corner.

NOTES: Van Riemsdyk was injured after a hard hit by Cal Clutterbuck about 30 seconds in. He skated off the ice holding his left shoulder and sat on the bench for several minutes before heading to the dressing room. The Hurricanes later announced he had an upper-body injury. … The Hurricanes’ goals in the opening 1:05 of the third marked the franchise playoff record for fastest two goals to start a period. … The Islanders scored first for the first time since Game 1 of the opening round against Pittsburgh. … The Islanders trailed for nearly 19 minutes in this game after playing with a deficit for only 4:51 during the four-game sweep of the Penguins. They didn’t trail in the 1-0 overtime loss in Game 2.