The driver of a pickup truck who was responsible for a deadly wreck involving a school bus has now been charged in the incident.

Authorities have charged Elvy Ohel Matamoros with Misdemeanor Death by Vehicle, No Operators License, and Failure to Stop at Stop Sign.

Troopers say 63-year-old Cynthia Thomas, of Albemarle, has died from the injuries she sustained in the wreck involving a school bus on May 14th.  Trooper Ned Moultrie says Thomas’ Toyota Scion crashed into the back of the bus that was carrying 15 students.

Thomas died on Sunday.  Trooper Moultrie says charges are still being determined for the driver of the pickup truck that reportedly caused the accident by running a stop sign and colliding with the bus.

Read below for more information about the crash. 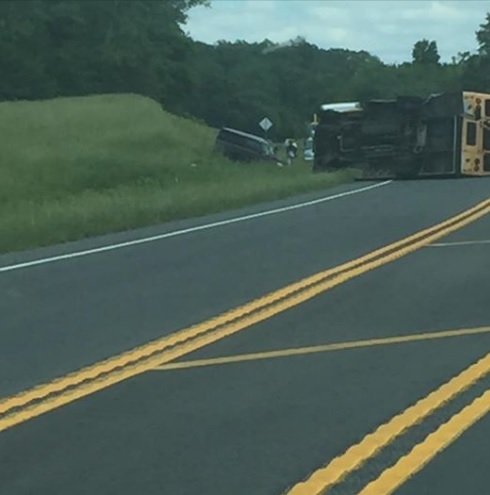 Troopers say the accident happened on US 52 at Quail Ridge Road in Albemarle. The bus that flipped onto its side is a Norwood Head Start bus.

I should have an update in about 10 minutes. The bus is a Norwood Head Start Bus. For those who don’t know, Head Start is a federally funded pre-school program. @WCCBCharlotte https://t.co/87lgYRUOV9

The NCSHP says 15 students and two adults were onboard when a pickup truck ran a stop sign and hit the bus. Troopers say that same pickup also sideswiped another vehicle during the collision.

The driver of the third vehicle was airlifted to the hospital, officials say, and the majority of the bus’s passengers were transported with non-life threatening conditions.

You can see the tire marks where the pickup truck blew a stop sign, hitting the bus and then side swiping another car. @WCCBCharlotte pic.twitter.com/LCEYyAP0gA

We have a crew at the scene and are working to gather more information.