Concord Police say Caterina Maria Altadonna has been found and is safe.  Altadonna was located at a Kannapolis, North Carolina residence with her boyfriend.

Investigators determined Altadonna was not abducted and voluntarily left to be with her boyfriend.

CONCORD, N.C. — The Concord Police Department needs your help locating a missing teen in Concord.  Investigators say Caterina Maria Altadonna was last seen Wednesday, May 29th at 6:15am as she was leaving for school. 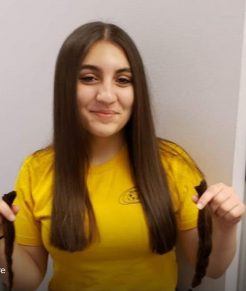 Altadonna is approximately 5′ tall and 120 pounds and was last seen wearing black leggings with a red stripe down the side and a white jersey type shirt with red lettering.  Altadonna was also carrying a light blue backpack when she left her residence.

Anyone with information on the whereabouts of Altadonna is asked to contact the Concord Police Department at 704-920-5000.