According to the Catawba County Sheriff’s Office, 32-year-old Justin Drew Dalton was located and arrested on Thursday, May 30th shortly before midnight.

Officials say a Catawba County deputy saw the suspect vehicle in a Hickory parking lot.  Dalton led authorities on a brief foot chase before deputies and the Hickory Police Department officers were able to apprehended him.

Justin Dalton is charged with Murder in the death of Emden Lee Syres Jr. on May 29th.  Dalton is also charged with Larceny of a Motor Vehicle and charged on outstanding warrants from 2017 for Misdemeanor Child Abuse and Driving While License Revoked.

NEWTON, NC — The Catawba County Sheriff’s Office has issued warrants on a man identified as a ‘person of interest’ in a homicide that happened early Wednesday morning. 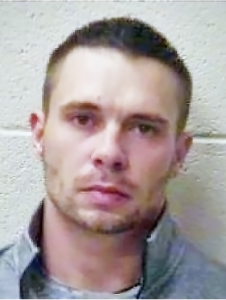 Investigators say they are looking for 32-year-old Justin Drew Dalton. He is believed to be driving a stolen black 2016 Honda Accord with license plate number DMR-8076.

On Thursday, the CCSO issued warrants on Dalton charging him with Larceny of a Motor Vehicle.

Shortly after 9am on Wednesday, detectives say Emden Lee Syres, Jr. was found dead inside a home on Sigmon Dairy Road. Deputies responded to the home after a concerned co-worker reportedly called to say he had not shown up for work.

The Catawba County Sheriff’s Office says they are currently investigating the death as a homicide.

Officials say Dalton also has outstanding warrants for Child Abuse and Driving While License Revoked out of Alexander County. If you see Dalton or the vehicle, deputies say you should NOT approach him. Call 911 immediately.

Anyone with information on Dalton’s whereabouts or this case is asked to call the CCSO at 828-464-5241.