Craig Stephen Hicks, 50, entered the plea to three counts of first-degre e murder in a Durham courtroom packed with dozens of the victims’ family and friends. It came two months after the new district attorney dropped plans to seek the death penalty in hopes of concluding a case that she said had languished too long. 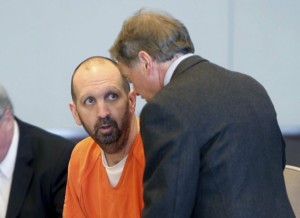 Police say that in February 2015, Hicks burst into a condo in Chapel Hill owned by 23-year-old Deah Barakat and fatally shot Barakat, his wife, Yusor Abu-Salha, 21; and her 19-year-old sister Razan Abu-Salha.

At the time of the slayings, Barakat, a dental student at the University of North Carolina-Chapel Hill, and Yusor Abu-Salha had been married for less than two months, and she had just been accepted to the dental school. Razan had just made the dean’s list in her first semester at North Carolina State University. All three were making plans to visit Turkey during their coming summer break to volunteer in a dental clinic at a camp for Syrian war refugees.

Barakat was shot several times as he stood in his doorway, autopsy results showed. His wife and her sister were shot in the head at close range inside the condo.

On Wednesday, Hicks listened attentively as the prosecutor, Kendra Montgomery-Blinn, described him as a man who was watching the American Dream slip away while the victims were pursuing it. She said Hicks’ third marriage was disintegrating and he’d recently quit his job in anger after workers described him as constantly playing computer sniper games.

“The defendant was an angry and bitter man,” Montgomery-Blinn said.

At the time of the shootings, Chapel Hill police said Hicks claimed he was provoked by competition over parking spaces at the condo complex. Relatives of the victims said they believed the shootings were a hate crime.

The slain women’s father, psychiatrist Mohammad Abu-Salha, testified to a congressional hearing on hate crimes in April that Hicks had expressed hateful comments about his daughters wearing head scarves in observance of their faith.

“Three beautiful young Americans were brutally murdered and there is no question in our minds that this tragedy was born of bigotry and hate,” Dr. Abu-Salha testified before the U.S. House Judiciary Committee.