Police say Karsyn Fleisch has been found and is safe. No other details have been released at this time. 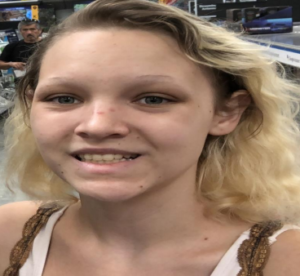 Officials say Karsyn Lee-Marie Fleisch was last seen around 5:48 p.m. leaving the Walmart on Highway 9 Bypass West. Police say she was seen on surveillance video getting into a Maroon or Burgundy Cadillac with tinted windows. She was a passenger in the vehicle.

Fleisch is described as a white female, around 5 feet 7 inches tall, between 120 and 130 pounds, and last seen wearing two tank tops (one white and one brown), grey cotton shorts and black shoes. Police say she has “believe” with a crown tattooed on her right wrist.

The photo above was reportedly taken on the day she disappeared.

Anyone with information on her whereabouts is asked to call the Lancaster Police Department at 803-283-3313.

Text2Win "You Don't Nomi" On DVD