“The convention logo reflects both the energy of this vibrant city and traditions of the Republican Party. We look forward to working with the wonderful people of the Queen City to host a historic convention that will propel President Trump to a second term,” said RNC Chairwoman Ronna Daniel. Further explanation of the logo mentioned how it was designed to showcase the passion of the city of Charlotte. The logo includes a red elephant, an iconic symbol for the Republican Party, along with five inset white stars in front of the Charlotte crown, inspired by Queen Charlotte. 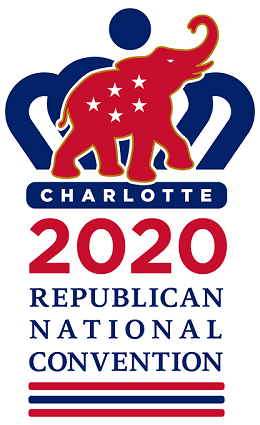 The Charlotte 2020 Republican National Convention logo was unveiled at an event at the Spectrum Center on Thursday, August 1st, 2019.

“The symbol of the Republican Party – the strength of the elephant, combined with Charlotte’s iconic crown symbol illustrates how proud we are that this logo will be a part of our city’s and nation’s history for decades to come,” said Kelly.

“Today’s announcement is just the beginning as we continue to build a wonderful event where we will re-nominate our President in August 2020,” said Chairman of the Committee on Arrangements, Toni Anne Dashiell.

Kelly also noted the logo will be prominently featured on all official convention related materials and communications from this point forward. It will take place in history with the logos and symbols of the 41 previous Republican National Conventions.

The 2020 Republican National Convention will be held August 24-27 in Charlotte, NC.