HUNTERSVILLE, NC — Police say a 22-year-old man has been charged in connection to an armed robbery that happened overnight on August 7th.

The crime happened at a McDonald’s on Boren Street just before 3am on Wednesday. Police say Devaughn Thompson was identified as the suspect and arrested later that day. 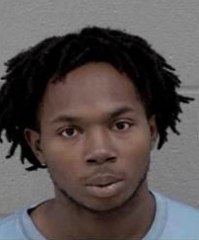 He is charged with Armed Robbery with a Dangerous Weapon, two counts of Assault by Pointing a Gun and Possession of a Firearm by a Felon.