‘Wahoo!’ Charlotte Grandmother Says After Getting A $1 Million Phone Call

RALEIGH, NC – Wendy Johnson of Charlotte said she wanted to scream after she got a phone call from the lottery telling her she won $1 million. 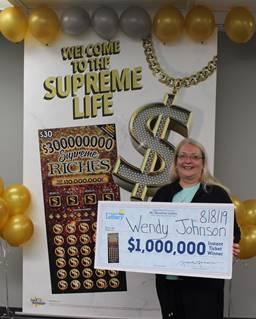 “I couldn’t because I was in A.C. Moore when I got the call,” Johnson said. “But now I will. Wahoo!”

“No Way!” Johnson said in disbelief when she heard the words, “You have won $1 million.”

“Oh my God! You’re kidding me. You’re kidding,” Johnson said. “My heart’s beating so fast. I have tears streaming down my face I’m so happy. Oh my gosh. I ‘m so happy I want to scream!”

“I never thought I’d win but oh I was praying,” Johnson said. “When I got the phone call, I actually thought I’d won one of the smaller drawings. It never occurred to me that I’d actually win the $1 million.”

Johnson claimed her prize hours later at lottery headquarters in Raleigh. She had the choice of taking a $1 million annuity that has 20 payments of $50,000 a year or a lump sum of $600,000. She chose the lump sum. After federal and state tax withholdings she took home $424,500. The grandmother of two said she plans to use the money to buy a new house and take care of her children and grandchildren.

The $30 ticket launched in April. This was the first of four second-chance drawings associated with the ticket. In addition to the $1 million prize, four people won $10,000 and 50 people won $200.