Trump’s North Carolina Rally To Be A Test For His Clout, GOP

WASHINGTON (AP) — President Donald Trump’s rally in North Carolina will serve as a measure of his clout in trying to elect a Republican to the House in a closely watched special election that’s seen as a tossup race. 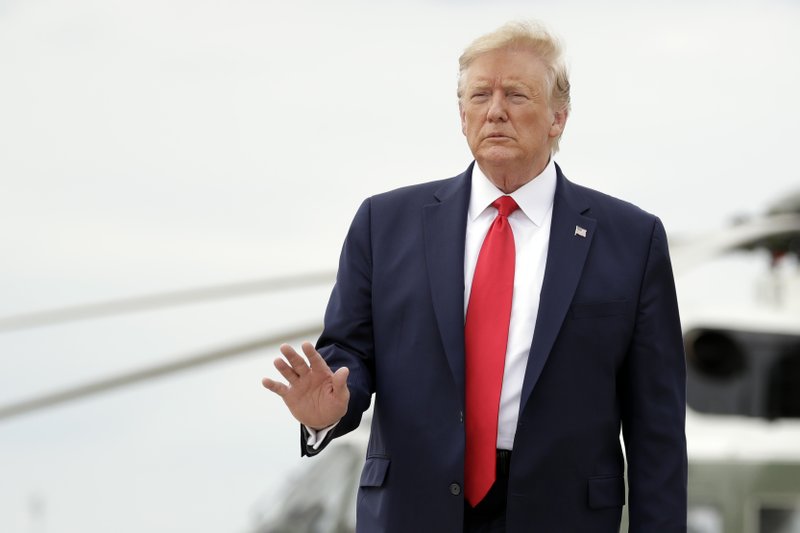 It will be his first campaign rally since a tough end of summer that saw slipping poll numbers, warning signs of an economic slowdown and a running battle over hurricane forecasts.

Trump will visit the state Monday night on the eve of the House election. He enjoys wide popularity within his own party, but a GOP defeat in a red-leaning state could, when combined with a wave of recent bad headlines, portend trouble for his reelection campaign.

Before leaving Washington, Trump dismissed questions of whether a poor result for the Republican candidate would serve as a warning sign in next year’s elections.

The rally may also pose a different sort of test: It will be held just over a 100 miles from the site of a Trump rally in July where “send her back” chants aimed at a Somali-born American congresswoman rattled the Republican Party and seemed to presage an ugly reelection campaign.

Trump’s appearance Monday on behalf of Republican Dan Bishop is shaping up as a test of the president’s pull with voters. The special election could offer clues about the mindset of Republicans in the suburbs, whose flight from the party fueled the GOP’s 2018 House election losses.

The district has been held by the GOP since 1963. In 2016, Trump won the district by 11 percentage points. Should Bishop defeat Democrat Dan McCready, it could let Trump assert that he pulled Bishop over the top. If McCready prevails or Bishop wins by a whisker, it will suggest GOP erosion and raise questions about Trump’s and his party’s viability for 2020.

“This will tell us if Trump can carry candidates through suburban districts or not,” said Sarah Chamberlain, president of the Republican Main Street Partnership, which represents moderate Republicans. If not, she said, the GOP must “work harder to address the concerns of suburban individuals, mainly women.”

Marshville residents Philip and Diane Ezzell, both 70, were near the front of the line waiting to enter the Trump rally. Both attributed their support for Bishop to his backing by Trump. “We like his values, and he supports Trump,” Diane Ezzell said. “And we don’t want no socialist clowns.”

That was a reference to a TV spot by Bishop superimposing the faces of McCready and other prominent Democrats on swaying clown figures.

While the stakes for the House are high, Trump’s trademark rallies inevitably become more about him than the local candidate, as he uses the stage to settle political scores, sharpen attacks and take on perceived foes. After a light rally schedule of late, the president will have plenty of new material to work with.

Chief among them are the White House’s worries about the impact an economic downturn could have on a president who has made a strong economy his central argument for a second term. Trump advisers worry that moderate Republican and independent voters who have been willing to give him a pass on some of his incendiary policies and rhetoric would blame him — and, in particular, his trade war with China — for slowing down the economy.

Those attacks have been cheered by Trump’s advisers, who are bullish on running a campaign critical of Democrats they cast as socialist and unpatriotic. But they went too far for many Republicans, who recoiled when the crowd at a Trump rally in Greenville, North Carolina, in July erupted into a “send her back” chant about Rep. Ilhan Omar of Minnesota.

In the hours before the rally, Trump is expected to visit coastal North Carolina to inspect the damage left by Hurricane Dorian. He spent considerable effort over the last week defending his erroneous claim that Alabama was likely to face significant impact from the storm.

McCready has not had any public events in the district with Democratic presidential hopefuls, appearances that might not help him in the moderate area as those candidates jostle to appeal to liberal voters. But former Vice President Joe Biden and Sen. Elizabeth Warren, D-Mass., two rival candidates, have emailed fundraising solicitations on his behalf. Meanwhile, Vice President Mike Pence will also campaign in the district on Monday for the Republican.

Democrats captured 39 GOP-held House districts in the 2018 midterm elections, more than enough to give them majority control of the chamber. Much of that turnover occurred in suburbs, largely in Democratic strongholds like California and New Jersey but also in red-leaning communities near places like Dallas, Oklahoma City and Atlanta. GOP alarm bells have been ringing about the suburbs ever since.