MORGANTON, NC — Several schools in Burke County were placed on a soft lockdown early Wednesday morning while authorities searched for a man accused of breaking into a home.

Around 8:14am, the victim reported a break-in at their home on Pete Brittain Road near Enola Road. Deputies say a white male suspect was seen running into the woods across from Liberty Middle School, which prompted a full search of the surrounding area.

Liberty Middle School, North Liberty and Patton High Schools, and the J. Iverson Riddle Center were informed of the search and placed on a soft lockdown. 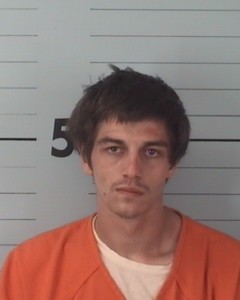 Deputies were able to identify the suspect as 22-year-old Samuel Hensley, authorities say, based off of the victim and witness’ description. Officials also found two bags of stolen property during the search that were dropped by the suspect as he fled on foot.

Hensley was reportedly found around 8:50am in the crawlspace of his mother’s nearby home on Pete Brittain. K-9 units were called to the scene, and Hensley surrendered around 9am.