*OUT OF RESPECT FOR THE FAMILY OF THE VICTIM IN THIS ACCIDENT, THE VIDEO HAS BEEN REMOVED AT THIS TIME*

A video sent to WCCB by Danny Gurley shows the moments after a deadly crash on I-485 at Providence Road on Tuesday.

The video shows witnesses attempting to help the victims of the wreck after a vehicle reportedly drove off the Providence Road overpass at I-485 and landed on a vehicle traveling on I-485, causing the vehicle already on I-485 to flip over. 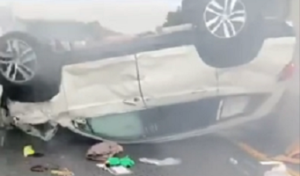 The vehicle that drove of the Providence Road overpass then crashed into the retaining wall on I-485 where it came to rest.

CHARLOTTE, N.C. — Troopers with the North Carolina Highway Patrol are investigating a deadly crash that happened on I-485 in south Charlotte.

The accident happened just after 10am Tuesday on the outer loop of I-485 near Providence Road.  One person has been pronounced dead on the scene.  Two other people have been taken to a local hospital with serious injuries.

Expect major traffic delays in the area.  No other details have been released at this time.  Check back for updates.